THE VISCONTI SFORZA VERSION OF THE TAROT WHEEL

Let us assume the following statements:

The trumps Star, Moon, Sun, World, Temperance and Strength in the Visconti Sforza deck were, by consequence, no replacement cards, but additional ones to transform the deck from a 70 card structure to a 78 card structure. According to specialists of Art, these additional cards have been created by a different artist than the other cards, somewhere in the last quarter of the 15th Century. They were almost certainly created after the Este decks, maybe at the occasion that Gian Galeazzo Sforza became officially Duke of Milan, in 1476 at the age of 7 years.

Two cards are missing, the Devil and the Tower. Because these cards reminded the Italian nobility of the probable fate awaiting them after their death, they maybe did not keep them as carefully as the other cards. In any case, if they existed, they got lost in time.

Because the structure changed, the artist creating the new cards had a dilemma. In the trump structure consisting of 14 cards, the highest card was the Last Judgement and this card portrayed in the Visconti Sforza deck God himself. In the new structure the last card represented God himself, through the representation of the Universe, the disk of the World. For the Visconti Sforza deck, it was not possible to have a card trumping over God. This gave the artist two options:

Replacing such a beautiful card was apparently excluded by the Milanese nobility, so it was decided to adapt slightly the structure. Let us first have a look at the additional images: 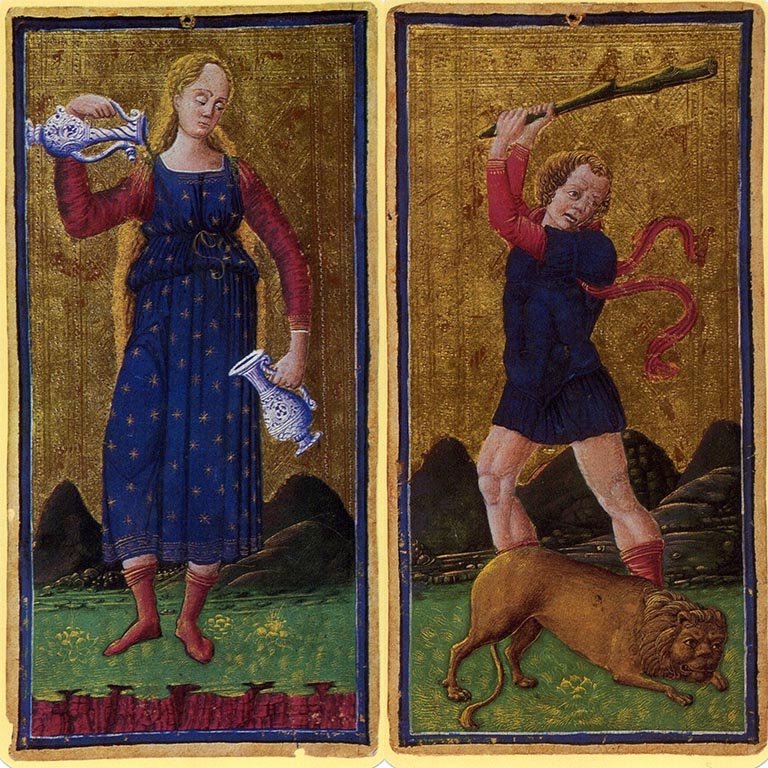 We start with the virtues. As we have seen in the discussion about the Este Tarot, in the trump structure consisting of 22 cards,  Temperance and Strength complete the cardinal virtues. Temperance replaces the virtue Justice on top of the first group, the Estates of the Realm, and Strength replaces the Last Judgement on top of the second group, the Hardship of Life. In the original 14 trump cards of the Visconti Sforza deck, the first (the Fool) and the last (Death) trump are portrayed as giant persons in front of a mountainous landscape, the mountains representing the obstacles we encounter in our daily life. The six new cards are all placed in a similar landscape.

Temperance is shown in its traditional representation, as a woman who is pouring a liquid from one jar to another, probably water in wine.

Strength is rather atypical. Scholars have compared this particular scene with the classic story of Hercules slaying the Lion of Nimea or with the Biblical stories of Samson (Judjes 14:5-6) or David(1 Samuel 17:34-36) slaying a lion. But if you carefully look at the image, something else is happening. The lion is in a position of attack to something coming from the right (traditional the future in Tarot) and the man on the card is not in a position to hit the lion. Instead, it seems he is defending himself against a danger coming from the same direction. If this is the correct interpretation of this card, the card expresses courage to face a great danger, manifesting itself in the near future. 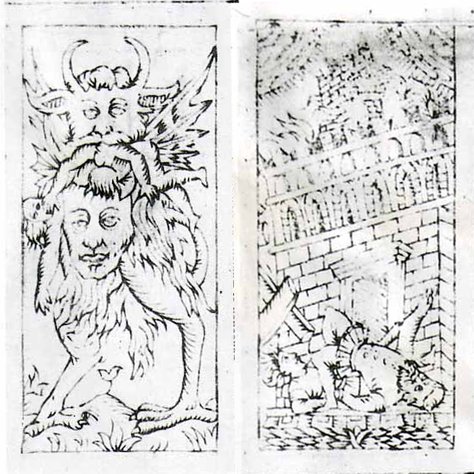 The Devil and the Tower of the Visconti Sforza deck did not survive time. To construct the Tarot Wheel for this deck we will replace these to cards with the images that we find on an uncut sheet that belongs to the Rothschild collection conserved in the Louvre museum in Paris. The images date from approximately 1500 and have their origin in Bologna in Italy. 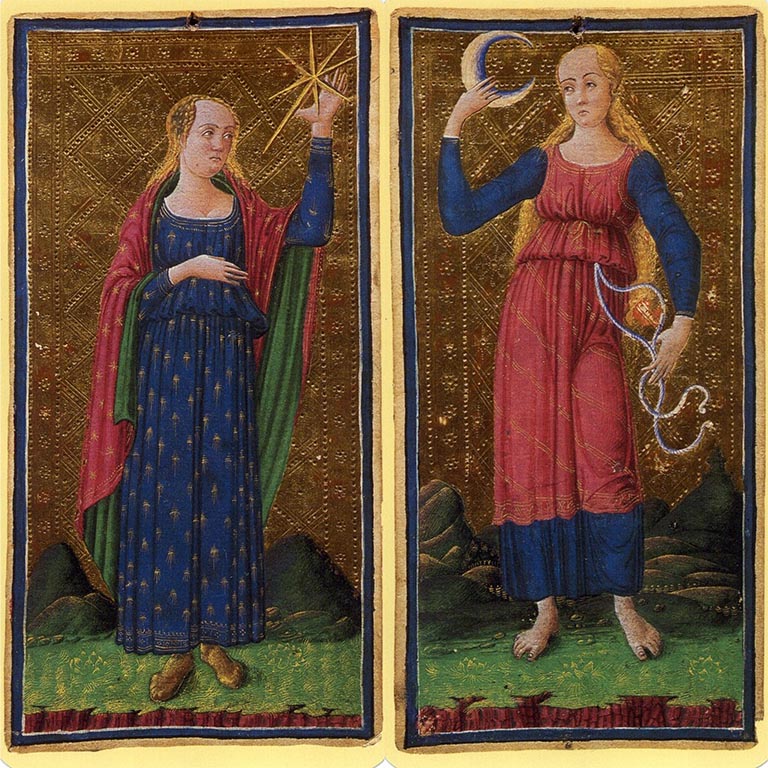 The second pair in the group called "the Ascent to Light" consists of two cards representing the Star and the Moon. They are portrayed in an identical way as the virtue of Temperance, with the same giant woman wearing a dress in the same color combination. On the card at the left, she holds an eight pointed Star symbol in her left hand, and on the second card, a Crescent in her right hand.  Except for the Star and the Moon, these two cards do not express any specific symbolism. The women might represent the Roman goddess Venus,  goddess of Love and her sister Diane, Moon goddess and twin sister of Apollo, the Sun God. Until now, there is no difference in the structure compared with the Este decks, nothing has been added or changed. The next two cards on the decks from Ferrara represent the Sun and the Last Judgement. On the Visconti Sforza deck, it's here that the changes in the structure start. 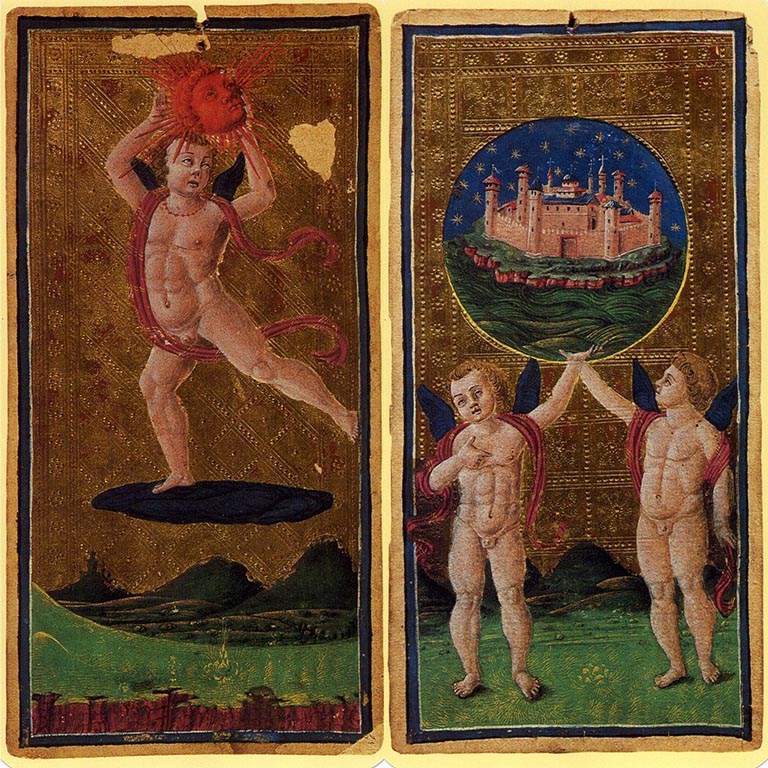 Both cards form again an evident pair. They exhibit identical cherubs, alone on the first card, twins on the second one. They ressemble a lot the man on the Strength card. On the left card representing the Sun, the Cherub is standing on a dark cloud and grabbing a red Sun from the sky. The sun is represented in the form of the head of Apollo, the Sun God and twin brother of Diana, the Moon Goddess.

On the second card, two Cherubs are holding a disk. Inside the disk, we see a walled city on an island. This card might be a reference to one of the last pages in the Bible, Revelations 21:2

2. And I John saw the holy city, new Jerusalem, coming down from

God out of heaven, prepared as a bird adorned for her husband

This holy city, the New Jerusalem, is fully compatible with the Ascent to Light, and replaces in a very nice way the Last Judgement, that in the case of the Visconti Sforza deck, representing God himself, will stay the highest card, trumping all other ones. The Tarot Wheel of the modified Visconti Sforza deck will have the following appearance: 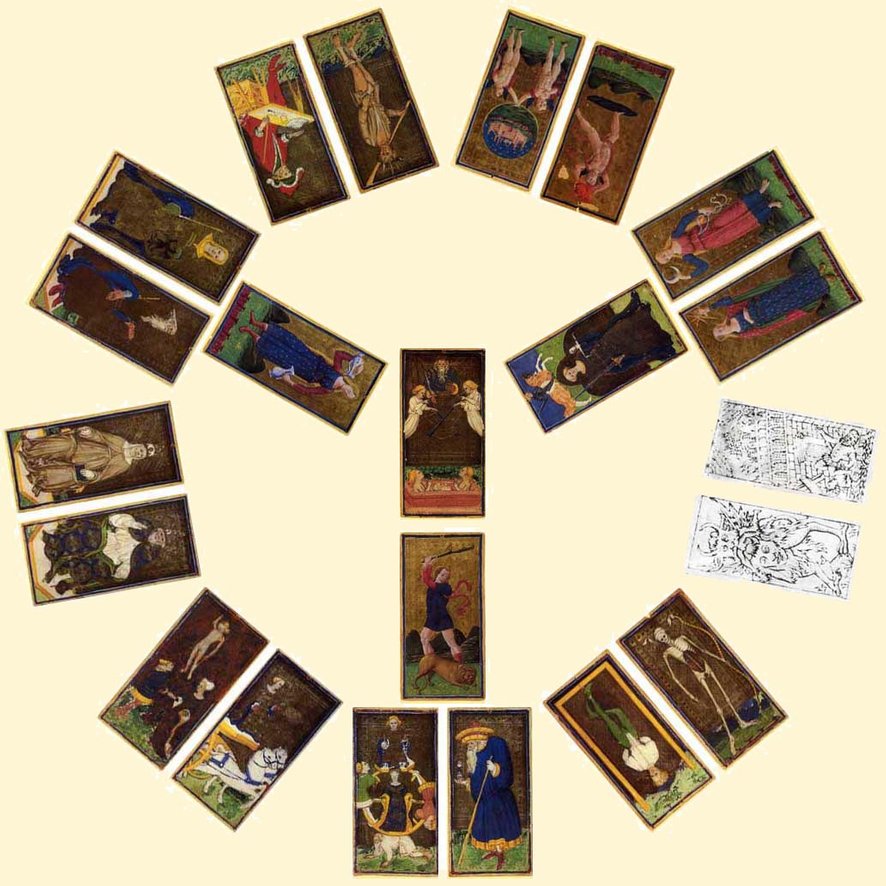 Instead of the World, as in the Tarot Wheel of the Este family, we have the Last Judgement, with an image of God himself, in the axis of the Wheel. Is this modified wheel less than the Este Tarot Wheel? No, not at all. To conclude, what did we learn until now:

The Wheel structure is the basis of the trumps. The Marseille Tarot is the last version using this kind of structure, although very different when we compare this with the Italian Tarot decks. The suit cards have their own structure. But this you will discover on the corresponding pages.