8.The Chariot of Triumph

10.The Wheel  of Fortune

11.The Hunchback (The Old Man, Time, The Hermit)

19.The Angel (The Final Judgement)

The Fool was considered zero according to the Sermones. So let us consider him 0 and so placed before the number 1. If we remove the Virtues and the World, we have exactly the nine pairs ordered in the way I described them on earlier pages. Temperance is mentioned after the third pair, Strength after the fourth pair and Justice after the Last pair. Why is Strength not mentioned after the sixth pair? The reason is simple; with (moral) Strength you can trump over your desire for sex (love) or over your lust for Power (the Chariot). But you can never trump over your destiny, time, accidents or death. You can accept them as inevitable, but you cannot trump them. So, to easily remember the order in the game, Strength has been placed after the Chariot, but before Destiny (the Wheel)

To be able to explain the structure behind the Tarot trumps, I have to go back to the three levels I have developed before, The Estates of the Realm, the Hardship of Life and the Ascent to Light. I will use as much as possible the cards made for the Este family, because in my opinion it is in Ferrara that the structure originated.

The estates of the Realm 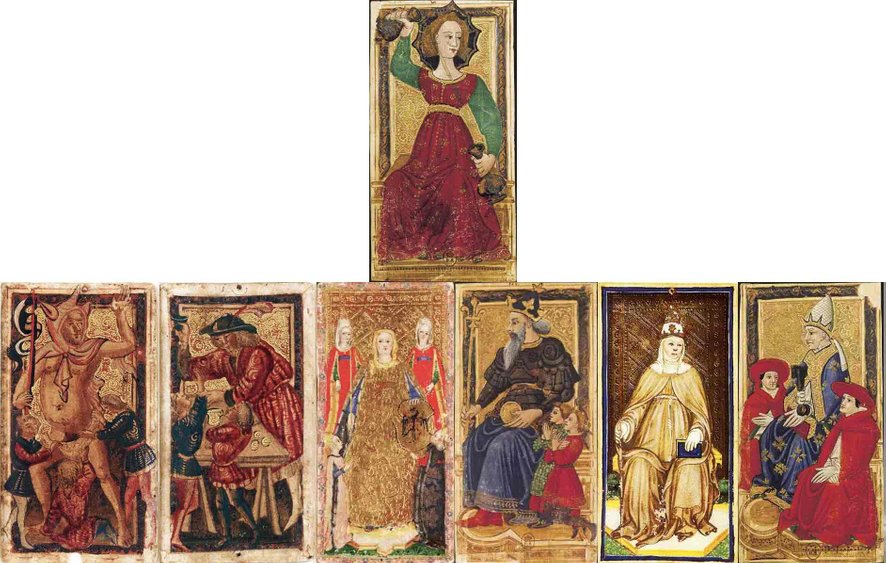 The first level represents, what Plato called the Soul of Appetite, and it is associated with human Society, with the three Estates of the Realm. Within this level, we find the three levels describing the structure of human Society:

Plato stated in his book "The Republic", that to be able to raise above the Soul of Appetite you have to be modest, you have to practice the virtue of Temperance. For this reason, this Virtue is placed above the Three Estates of the Realm.

The first two cards are from the Tarot of Ercole I of Este, the Empress is from the Visconti di Modrone, the Popess from the Visconti Sforza and the three remaining cards are from the Charles VI deck. Nor the Empress, not the Popess, are surviving in one of the hand-painted decks commissioned the Este family. They have, however, survived in the earliest  printed decks originating from Ferrara.

The hardship of Life

The second level is dedicated to what Plato called the Soul of Will. It describes the hardness of life, all the difficulties that you will have to overcome, especially the three blind powers. Within this level again three sublevels that gives advice to the aristocratic child. The lowest pair gives advice how you should behave. On the first card we meet Love, the first blind power. The card indicates that you have to control your sexual desire. On the second card a victory chariot indicating that you have to control your lust of power and be moderate in every aspect of life. The next pair is dedicated to time. The first card shows Fortune, the second blind power. The Wheel of Fortune is turning to indicate that good and bad luck are beyond your own power and that nothing lasts forever. This is further reinforced in the second card, where you see Father Time holding his hour glass. Time cannot be stopped, so don't waste the time that is left for you. On the first card of the  third pair we see a person hanged upside down. This card represents something happening that is irreversibly changing your life. Maybe the inquisition condemned you, you lost your wife, you lost the light in your eyes, something happened that cannot be changed.  On the last card, we see Death itself, the last and most powerful of the three blind powers, to indicate that you have to prepare yourself for the transition to the Afterlife.

To be able to raise above the Soul of Will, you need courage, you need to be strong, you have to practice the Virtue of Strength. The Este family placed the Virtue Strength directly behind the Chariot because, as explained before; self-control over your desire and your lust of power is something that you have in your own hand. Luck, time, illnesses and death are factors in life that cannot be influenced.

The Wheel of Fortune is a card from the Visconti Brambilla, all other cards are from the Charles VI deck.

The Ascent to Light 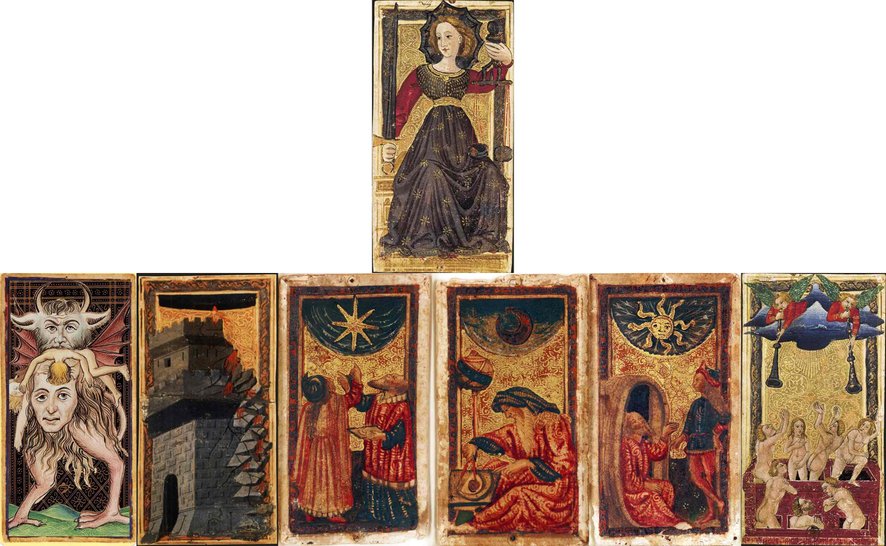 To be able to raise above the Soul of will, according to Neoplatonic view, you have to be just, you need to practice the Virtue of Justice. For this reason,  this Virtue should be placed above all other cards.

The Devil shown here is made by a modern artist, A. Atanassov, created in order of Lo Scarabeo for one of its version of the Visconti Sforza deck. As inspiration for this image, the artist used the Devil from the Rothschild sheet as a model. The Star, Moon and Sun are from the Ercole I of Este Tarot and the three remaining cards are again from the Charles VI deck.

The Tarot Wheel, a description of the human life cycle 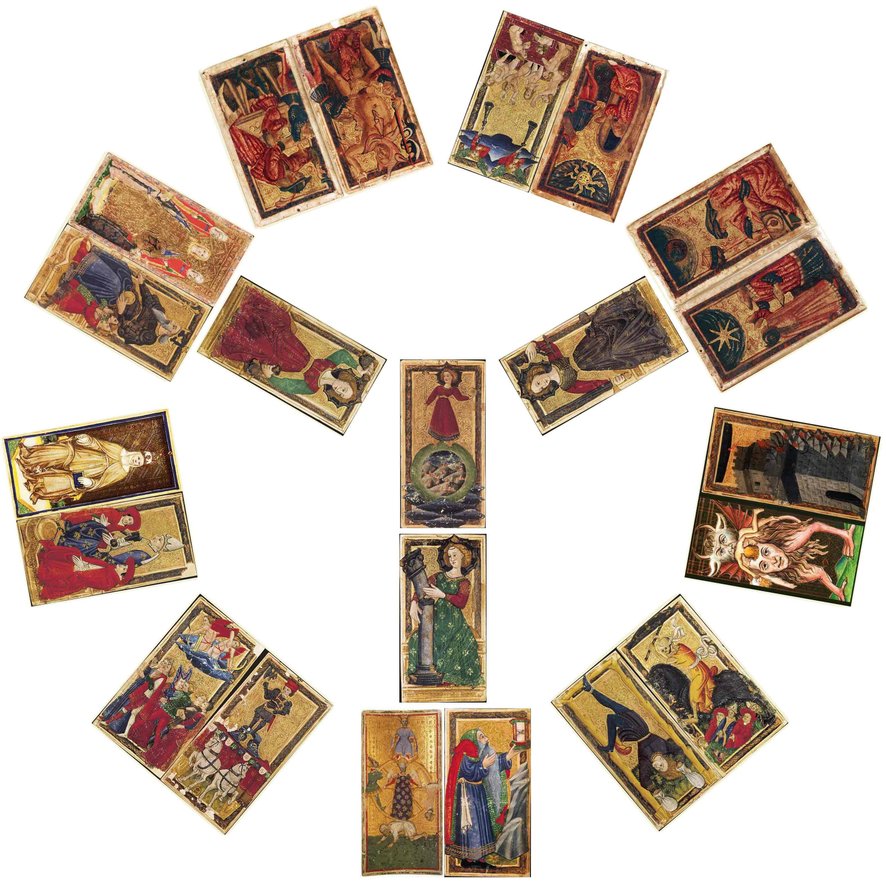 The eighteen cards forming the three levels of the Soul describe the human life cycle. It starts with the Fool, who has the innocence and the mind of a newborn baby, to finish with the last Judgement after the resurrection by the Angels. The three levels describe first our society, next the journey of the Soul through human life, with his battle against the blind powers, and finally the ascent of the Soul to God in the Afterlife as described by Dante in his Divina Commedia Because human life is a cycle the cards can be laid out in a circle. The three Virtues, who according to Plato purify the three levels of the Soul, are placed inside this circle, above their respective level, like spokes of a wheel. In the axis of the wheel thrones Prudence, the highest cardinal Virtue associated in the Renaissance with wisdom, standing on the disk of the world, representing the universe. In this representation, she is situated above the three other Virtues. The whole image resembling a wheel, we call it the Tarot Wheel.

To conclude, we can see that  the Tarot is divided in three levels. On the lowest level we find the cycle of the Human Soul from birth to reincarnation, on the second level the moral values that guide our behavior and on the highest level God himself. On the lowest level, the Human life cycle, the cards have a very distinct order. For game purposes only, the virtues are placed somewhere in this order, with big regional differences. The card representing God and eternity, the World, is almost always the highest trump. However, on the next page, we will see an exception.