THE SUIT OF SWORDS

Who has never heard about Excalibur, the legendary sword of King Arthur. Excalibur was a sword of legends, but it was not the only one. There existed many legendary swords, used by great man in combat. Some of them, Like Excalibur, existed only in legends, others were real swords belonging to real heroes. Some of these swords survived, at least partly. The sword shown here at right is exposed in the Louvre in Paris, and legends say that this sword was the one that Charlemagne was using in combat. What is sure is that this sword has been used for many centuries as the Coronation Sword for the French Crown, the first time for the coronation of Philippe III in 1270 and the last time for the coronation of Charles X in 1824. We can see it on a painting of King Louis XIV made in 1701 (see the image below the Sword). However, it is doubtful that parts of it ever belonged to Charlemagne. In any case, it was a very famous sword and of great value. It had in the late Middle Ages the same symbolic value for the French Kings as the Lombardian Iron Crown had for the Italian Kings, and thus for the Holy Roman Emperor.

When looking to relationships,  the intellect does not know about emotions. Justice can be pronounced just based on facts and rarely considering the emotional reasons behinds these facts. Behaving bad is not be able to control yourself, so it should be punished. Even if every act could be explained and justified by emotional reasons. Justice is not emotional. Personal relationships are forgotten. Only the facts are counting. For this reason, Swords are associated with the third person, with He and She or  They.  Only logical and rational considerations are accepted, there is no place for anything else, and certainly not for love and friendship. 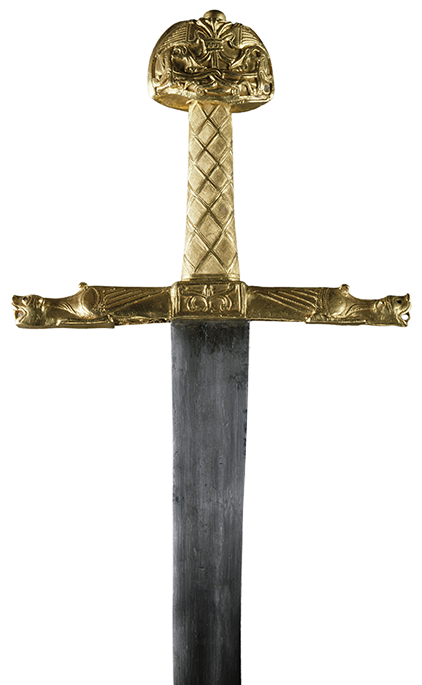 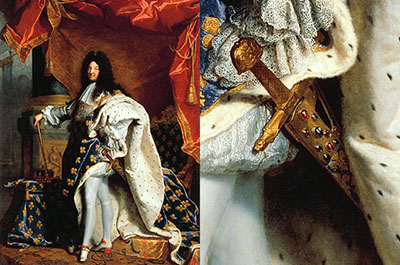 Again, I will show you cards of the three Visconti decks. I have chosen this time to display the Aces. From left to right the Visconti di Modrone, the Brera Brambilla Visconti and the Visconti Sforza deck. 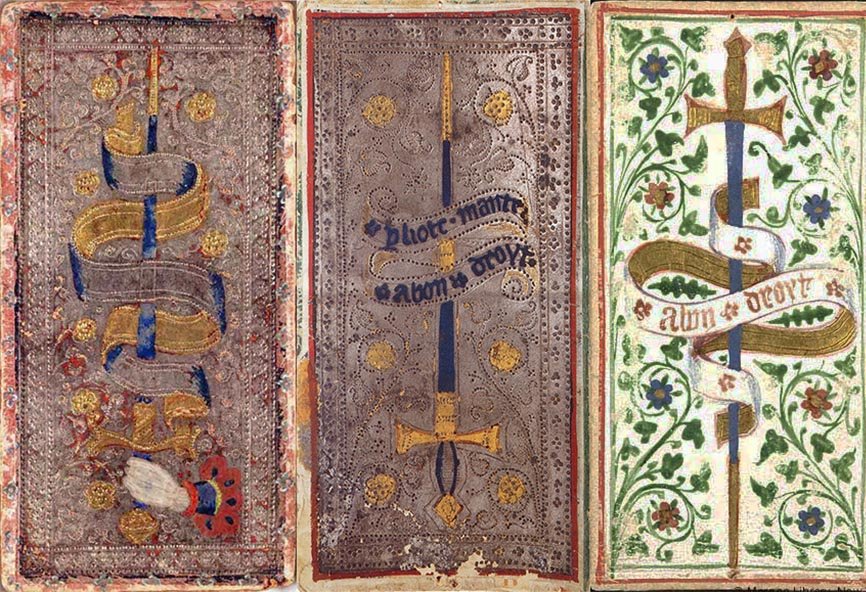 The cards need some explanation:

Visconti di Modrone. On the website of the Beinecke Library were the cards are conserved, the Ace of Swords is displayed upside down. But if you look carefully, you see a hand holding the sword in the air, definitely it is pointing upwards. I don't know what the original coloring was. The text on the banners has also disappeared, and from the colors on the hand only some blue spots are left. I recolored the hand to make it clear that the sword is pointing upwards.

Brera-Brambilla Visconti. This is the only straight sword on the numbered cards of this deck, all other cards show curved swords. Over the sword are floating two banners. On the uppermost one is written "phote mante". This means something like "hold your place" or "never give up". The second banner shows the Visconti device "a bon droyt" meaning something like "ruling legally".

On the printed decks, the disposition of the swords varied. 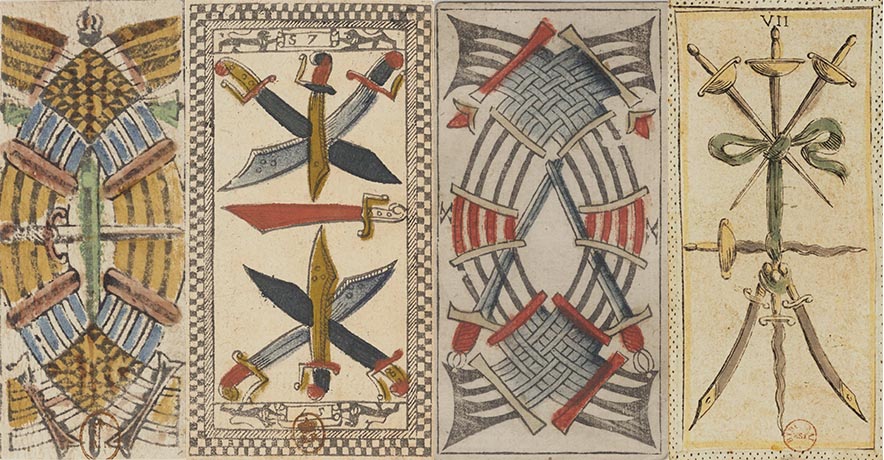 In conclusion, the swords deal with other people and their keywords are He, She or They. Not those people you love, but the other ones. And even if you know them, emotions don't count, only cold reasoning. You can discuss their behavior, judge them and decide what will happen to  them, without any second feelings. Just do what you think is logically the best. So if many swords pop up in a reading, the spread is likely talking about the outside world, and you can resolve any question just by cool logical reasoning.