In this section we will deal with the origin of the suit symbols , and how they are related one to the other. When dealing with the individual suit symbold we will deepen this knowledge a little bit further. It is generally agreed upon that the Suit symbols in the Tarot find their origins in the Mamlûk cards, with just a slight modification for the polo sticks, not known in Western Europe. So let us start our exploration of the suit cards with its closest ancestors outside Europe, let us have a look at some of the Mamlûk cards. 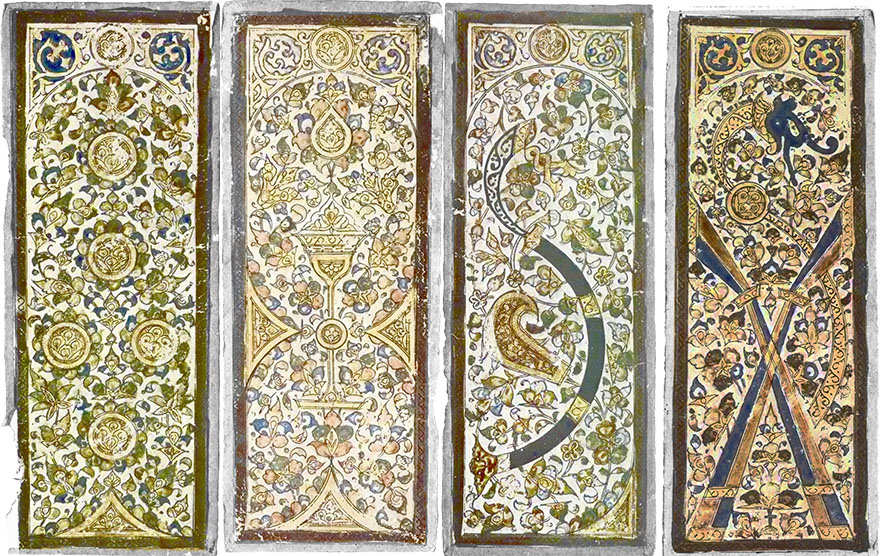 We have here the Five of Coins, the Ace of Cups, the Ace of Swords and the Five of Polosticks. The Islamic Art is in priciple purely figurative, it was not allowed to represent living creatures. But on these Mamlûk cards we can clearly distiguish leaves and flowers, and on the fourth card we even even see that the fifth polo stick is portrayed as a snake-like animal with the head of a dragon. The Coins and  Cups can easily be recognized, but the strangly curved sword and the polo sticks are with the dragon snake are less familiar. To state that the Italian card decks simply copied the Mamlûk symbols goes a little bit too far. They were inspired by these cards, but why? The reason why these symbols were conserved might be that most of them were already part of our own cultural heritage. They could be easily associated with many well known objects or concepts.

So, the four suit symbols of the standard Italian card decks became Coins, Cups, Swords and Batons. As an example I will show four numbered cards belonging to the Visconti Sforza deck, created probably for Bianca Maria Visconti somewhere between 1451 and 1453. 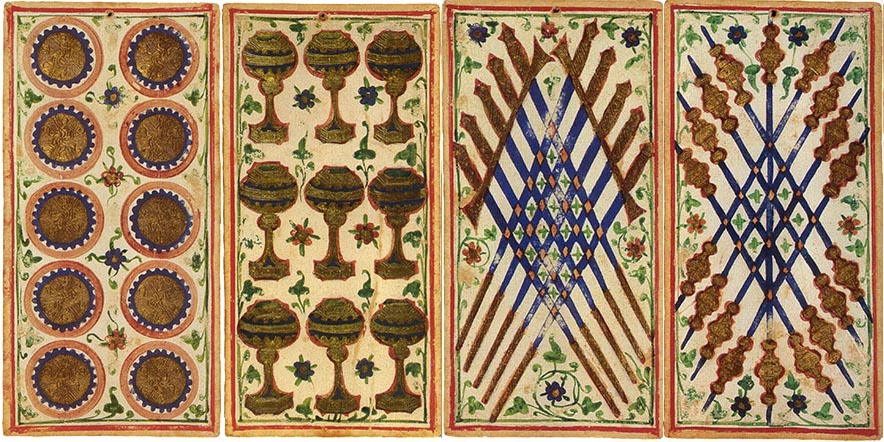 In the figure above we see the Ten of Coins, the Nine of Cups, the Ten of Swords and the Nine of Batons of the Visconti Sforza deck. These four symbols fitted very well the Northern Italian society in the 15th Century and some people think that this is the reason why these symbols were so easily adopted. Comparing the suit symbols with Northern Italian Society at the end of the Middle Ages, we can make some very obvious correspondences. In Northern Italy emerged around the 12th century some big cities that struggled against the dominating power of the Holy Roman Empire. These cities were very big, in the 13th Century Venice, Florence and Milan had each over one hundred thousand inhabitants. Other cities like Bologna, Verona and Genoa were not that big, but even they had largely over fifty thousand inhabatants and were difficult to control by centralized Feodal power. Independence of these cities was also advantaged  (except for those situated in the Po valley) by the mountaineous aspect of Italian landscape. So many City States emerged, centered around one of these cities :

For us the association between the suit symbols and the different classes in Northern Italian society is only interesting from a historical point of view. Many more associations can be made and what is interesting for us is how they act as a model for the Universe, where the  trump cards represent the spiritual world and the human life cycle, and the four other suits the physical world and human society.

Through the ages, the Physical World has been symbolized by the four elements; Earth, Water, Air and Fire. This division in a physical world and a spiritual world is  visualized in the figure here at right, pictured as a pentagram where we find the four elements representing the physical world with on top of them the Human Soul, representing the spiritual world. The four elements are represented by the suit cards and the fifth element, the Human Soul, is represented by the trump cards. So, the next question is,  how are the suit cards associated with the individual elements?

Before answering this question,  let us first dive a little bit deeper in the elements, and try to understand what they are really representing. 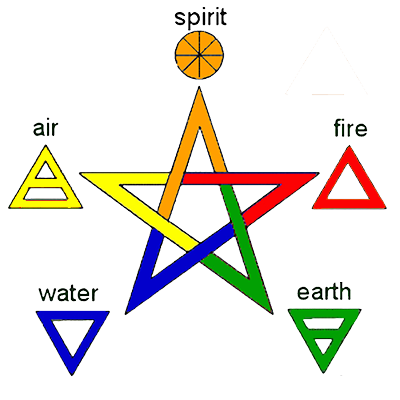 In Medieval times, when we were talking about the elements, we were talking about the building blocks of nature. This nature could be dead material or a living creature. Everything in nature was made up of one or more of the elements, nothing else was necessary to explain the composition of an object. Earth represents solid objects like a stone, water represents liquid objects like the sea, air represents gaseous objects like our atmosphere and fire represents concepts that were more difficult to get hold on, like fire and lightning. An object could consist of a single element, like a piece of rock, or it could consist of several elements, like mud, that is a mixture of solid and liquid materials. Living creatures combined all elements within their body. The skeletal parts of a body are solid, blood is liquid and all living creatures are in one way or another respiring. The element fire represents the Spirit of Life itself. Only humans posses the fifth element, the Human Soul. There is a clear hierarchy in the elements. When a living creature dies, the element fire, representing life itself, disappears first. When the element fire disappears, the creature stops respiring, so the element air disappears from the body. The body will slowly rot away or dry out, the element water disappears and only the element earth will stay behind. In the Bible this is written in the following way :

all are of the dust, and all turn to dust again (Ecclesiastes 3:20)

Today we know that the four elements are in fact different energy states of the same basic material. Take for example water. In its lowest energy state, at the coldest temperatures, water is solid and we call it ice. If we heat ice, it will melt and become water. When we are heating water it will evaporate and become vapour. We can see vapour for example as clouds in the sky. These changes are reversible; clouds can condense and form rain drops. Water can freeze and become ice. So in all the three energy states the internal structure does not change. But if we heat up a gas until extremely high temperatures, the element disintegrates liberating pure energy. It will never be the same element again. This disintegration process is visible in nature as fire. Ash can never be turned back again in wood. And the other way around, when life disappears out of a living creature, it will never become a living creature again. The passage between the third and the fourth element is an irreversible process.  The process of dying is a unstoppable process of energy fading away, from the highest energy level (Life) via intermediate levels (Air and Water) back again to the lowest level (Earth). 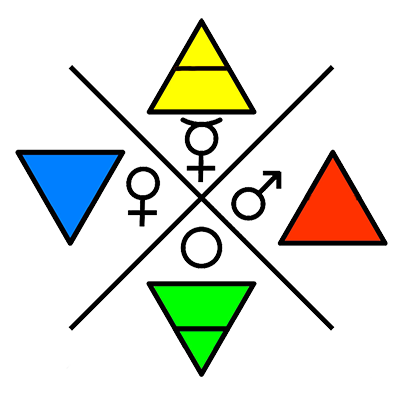 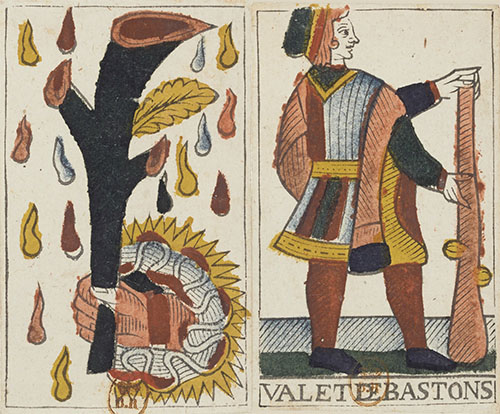 As an example we present in the figure above the Ace and the Knave of Bastons of the Tarot of Marseille made by Jean Noblet. From these illustrations it is clear that in the Tarot of Marseille, the batons have nothing to do with fire wood, there are leaves and buds on the Batons, it is living wood. Here the element Fire must be considered as the energy of Life.

Using these associations in comparison with modern suit cards, red suits are representing the receptive suits and black suits the dynamic ones. So hearts corresponds to cups, diamonds to coins, clover leaves to batons and spades to swords.  Also here, opinions differ from one author to another. The best solution is to follow your own intuition and to choose  decks with apparently those associations that seems most naturally to you.

To summarize, the suits, when related to the elements, are, when ordered  from the lowest energy level to the highest, Coins (Earth - Gaia, the Goddess Earth, solid materials), Cups (Water - Venus, the goddess of Love, liquid materials), Swords (Air - Mercury, the messenger God, gaseous materials) and Batons (Fire -  Mars, the God of War, pure energy). The trumps are related to the fifth element and represent the Human Soul. Coins and Cups are receptive female symbols and Swords and Batons are dynamic male symbols.  But these are not the only associations, we can make other ones, more usefull for meditation and card reading. We come back to the other associations when we reach the pages dealing with the individual suit symbols.