The second-highest figure in the Court is the Queen. A Queen represents a mature woman. Like the King who represents a father, she represents the  mother of a family. In reality, the King is often away or occupied with states affairs, so it is the Queen who manages the Court. She receives the guests and makes sure that the court is turning like it should. On the oldest surviving ancestor of the Tarot, the Visconti di Modrone (the Cary Yale Visconti), every suit has six court cards, three men and three ladies. On later decks there are, in general, four ladies (four Queens), in some rare case six (four Queens and two servants). The characteristics of the Queens are as follows:

The Queen of Coins represents the goddess Gaia, mother Earth. She is a very responsible mother, caring for her family. She is the real head of the family and managing the part of the earnings of her husband destined to family expenses.  She might also be a woman with a responsible job in society.

The Queen of Cups. Cups are representing the element Water in the suit symbols, and the Queen represents the element Water in the court cards. The Queen of Cups is the personification of the Goddess Venus, the ultimate symbol of love. Venus had many children, but none with her husband, the god Vulcan. With the god Mars (the King of Batons) she had four children, the twins Phobos and Deimos representing fear and terror, Cupid, who was with his arrows of love responsible for many children outside a marriage, and also Harmonia, the goddess of harmony. The queen of Cups  is a loving mother, loving her children, but easily involved in love affairs outside her marriage. Probably, she represents a very liberal woman.

The Queen of Swords is an intelligent woman. She is close to the Virtue Justice. She is a very just mother, making no difference between her children. Even if she may have a preference, she will never show it. All her children are treated equally.  The Queen of Swords  excels  in communication. She might be a writer or a journalist, always ready to inform other people. 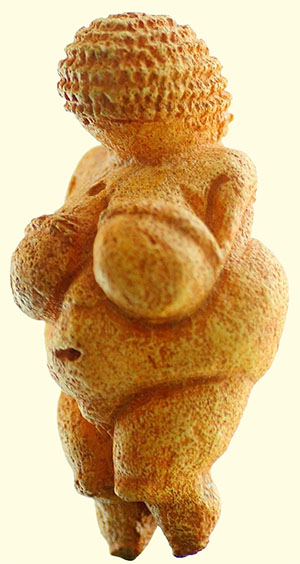 In general, on a Tarot deck, the Queen is young and beautiful. On the Visconti Sforza deck we see the portrait of Bianca Maria Visconti representing all the Queens. On the card representing the Queen of Swords she is portrayed in profile looking to the right,  to the future. The Queen of Coins is facing to the left, the past. On both other suits, Cups and batons, we see the Queen facing us directly, dealing with the present. As a typical representation for the Queens, we show a deck created in 1713 by Jean Payen, a deck belonging to the Tarot of Marseille family. Like the Tarot of Jean Dodal, the Tarot of Jean Payen is a Tarot of Marseille of Type I. Although being a member of the printers guild in Lyon, Jean Payen has created his deck in Avignon, a town situated over 200 km south of Lyon.

The Queen of Coins, representing Gaia, mother Earth, is an elder woman. The youngest of the four ladies is the Queen of Batons, who has long hair, hanging over her shoulders. Like the Queen of Coins, the Queen of Cups has a wand of power in her hand, an attribute giving them a higher status than the Queen of Swords. Here again, like with the Kings of Jaques Vievil, we can differentiate the Queens from the highest to the lowest status, and not very surprisingly in strictly the same order; Coins, Cups, Swords and Batons. 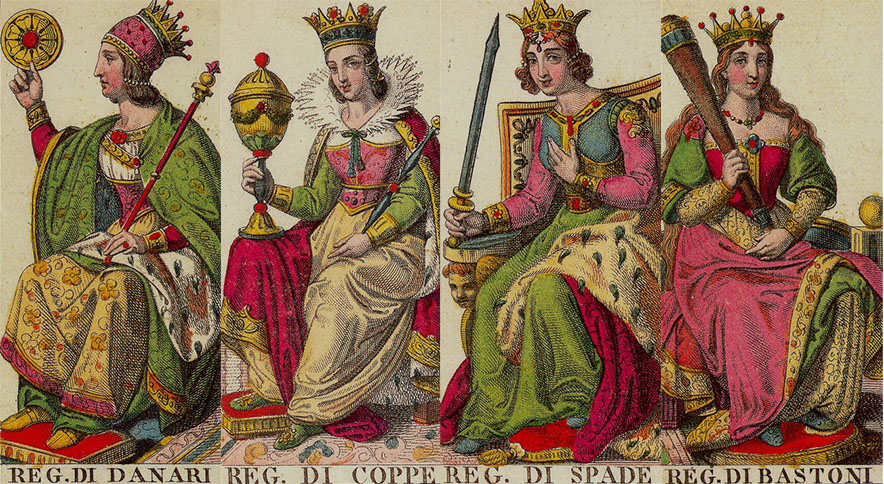 The characteristics of the Queens on the Soprafino Tarot are identical to those on the deck made by Jean Payen. Printing techniques had evolved, but the four ladies are represented in exactly the same way as on the Tarot of Marseille.