When a King is facing up in a spread, this indicates the influence of a mature man, a father figure. The suit color gives additional information about the character of this person:

King of Coins - Coins, associated with the element Earth, are on the lowest energy level of the suit symbols. Here, we can expect a maybe older person, whose family is established and whose children are having children from themselves. The typical King of Coins might be a grandfather, nourishing his grandchildren with his wisdom and gifts. The King of Coins does not occupy himself with other families, his own progeny is the only thing he cares of.

King of Cups - The King of Cups is a man with an open heart. He considers children of his family and friends like his own children. He can also be a spiritual father,  maybe a priest, head of a parish, considering all people in his parish as his children.

King of Swords - The King of Swords is a dynamic person who actively want to transmit the knowledge he has to other people. It can be a father very involved in the education of his children, or it can be a teacher at any level. Writers and Missionaries are also typical Kings of Swords.

Every card maker has its own manner to express the character of the figures on the cards. A very nice example with four distinct Kings, we find on the Tarot of Jaques Vievil created in the mid-seventeenth Century in the French capital Paris.

The King of Coins has a long beard and an old face. He is clearly the eldest of the four Kings. The next King is the King Cups, a mature man with a stylized beard.  The third King, the King of Swords does not have a beard, he is certainly younger than the King of Cups. And finally, the King of Batons has a very dynamic pose, clearly the youngest of the four Kings. All the Kings are different according to the characteristics described above. We have a clear confirmation of the rise in energy from Coins via Cups and Swords to Batons, with in every next suit younger and more dynamic Kings. This same representation of bearded and non-bearded kings also appears on the Tarot of Marseille and many other decks. Here below the Kings of the Tarocchi da Bologna deck dated to 1600. The full deck can be found on the links page.. 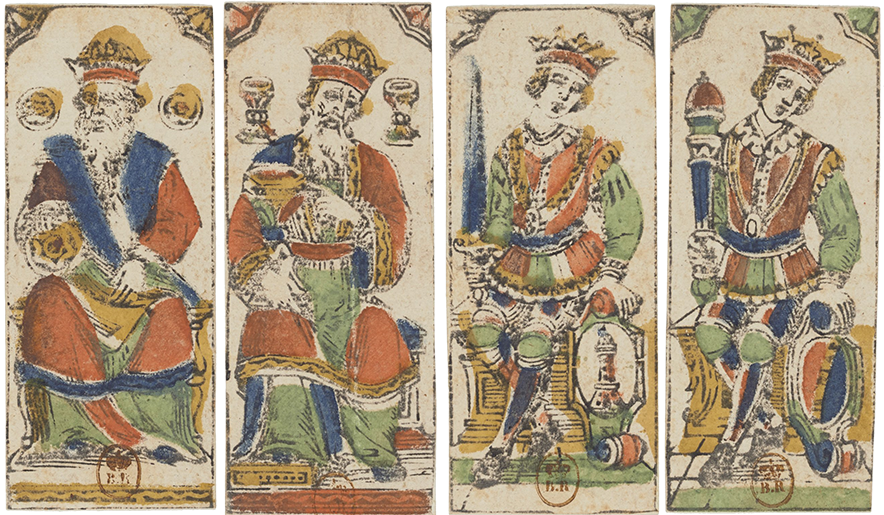 Not only the beards, but also the clothing of the figures on this deck, indicates clearly the difference of age between the dynamic (Swords and Batons) and the receptive (Cups and Coins) kings. The oldest deck using the old and young kings to distinguish between dynamic and receptive decks was the Rosenwald sheets. Here below the four kings of this deck.

Another interesting King, is King of Batons of the Tarot of Marseille. Have a look at the cards here below:

From left to right we have a reproduction of the 17th Century Tarot of Nicolas Rolichon, as represented in a 1907 publication of Larousse, the 1701 Tarot deck of Jean Dodal, the 1713 Tarot deck of Jean-Pierre Payen and the 1743 deck of his son, Jean Payen. On all four cards, we see the number 4 appearing next to the Emperor's head. This number 4 was probably the symbol for the printer's guild based in Lyon. The number 4 is a consistent symbol that we find on all type I Tarot of Marseille cards (except for the Tarot of Jean Noblet). This is one of the reasons why I put the Jean Noblet Tarot in a separate category.