On this page, you will find links to websites exposing original historical card decks, mainly  Tarot related, but also some other. Click on the deck image to get access to high-resolution photos of the original cards. More decks will follow soon. 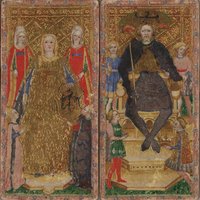 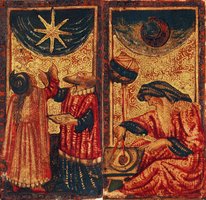 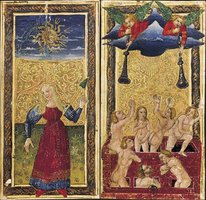 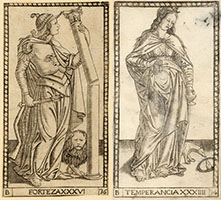 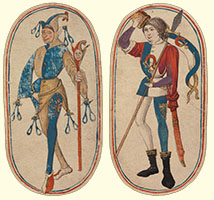 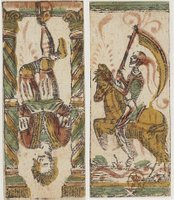 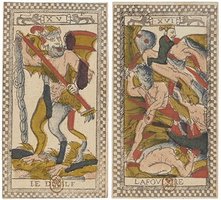 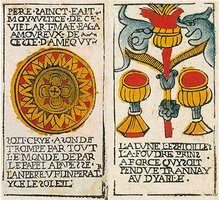 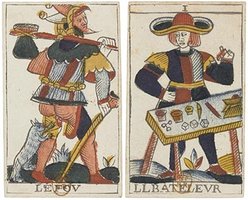 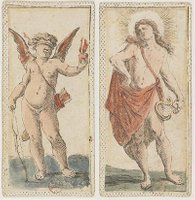 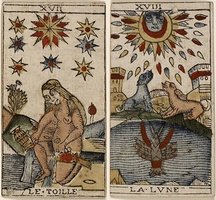 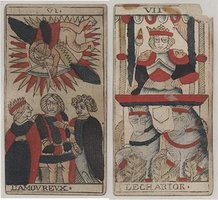 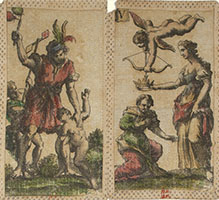 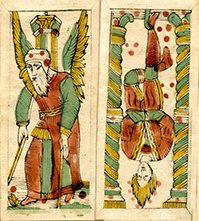 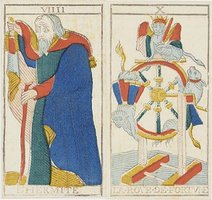 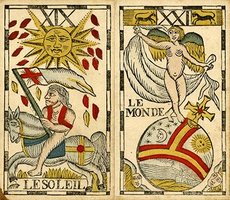 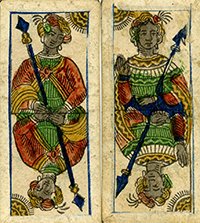 This is not a real Tarot deck, but one of its closest ancestors. It is the oldest-known Italian hand-painted Trionfi deck, commissioned in 1442 by the Milanese Duke Filippo Maria Visconti at the occasion of the marriage of his daughter Bianca Maria with the more than 20 years older condottierri Franceso Sforza. From the original probably 80 cards, 67 are surviving. They are conserved in the Beinecke Rare Book and Manuscript Library of the Yale University in New Haven, Connecticut

A second deck commissioned by the Milanese Duke Filippo Maria Visconti, probably not long before he died. 49 cards are surviving, of which 2 trump cards, 7 court cards and 39 pip cards. Hardly any high-resolution images are available on the Internet. Both images have a separate link. In anyone has better links, please provide them in the comments section

Probably the most famous hand-painted Tarot deck. Created between 1451 and 1454 in Milan, maybe at the occasion of the peace of Lodi. 72 cards survive, but they are scattered over three différerent collections. 35 of these cards are conserved in the Morgan Library in New York. High resolution images can be accessed if you click on the Conjurer.  The Accademia Carrara in Bergamo (Italy) has 26 cards. Only the Emperor is available in High Resolution.  The remaining 13 cards are in a private collection of the Colleone family, also in Bergamo.

An Italian hand-painted Trionfi deck, commissioned in 1473 by Ercole I d'Este, Duke of Ferrara, on the occasion of his marriage with Eleanore d'Aragon. The 16 surviving cards, 8 trump cards and 8 court cards are conserved in the Beinecke Rare Book & Manuscript Library.

An Italian hand-painted Trionfi deck, probably commissioned by the Este Court in Ferrara from an artist from Florence. The French National Library, where the cards are conserved, dates the deck to 1475. 17 cards are surviving, of which 16 trump cards. It is maybe the oldest deck that had originally 22 trumps. According to Ross Sinclair Caldwell, the deck is older, somewhere in between 1450 and 1460. Personally, I estimate the date of creation after 1460, the year when the future Duke Ercole I of Este returned to Ferrara after 15 years of education at the Neapolitan court of Alfonso of Aragon, King of Aragon, Sicily and Naples.

An a-typical deck of 50 prints, trumps only. The overall construction is very similar to the Tarot, and many cards appears in both sequences. The shown cards are conserved in the British Museum and were dated to 1465 (E-series) and 1470 (S-series).

Not a Tarot deck, but a beautiful and complete example of medieval (1475) European playing cards. These cards that originate from Belgium are conserved in the Metropolitan Museum in New York.

Master of the PW

Like the previous deck not a Tarot game but an historical European card deck from 1499 made in Köln (Germany) by the Master of the PW. The cards are conserved in the British Museum

Printed Tarocchino deck from Bologna. The original deck had 62 cards, in the Tarocchino di Bologna the 2, 3, 4 and 5 are not used. 57 cards are surviving. Conserved in the French National Library and dated to the beginning of the 17th Century.

The oldest complete (78 cards) French deck, with numbers (in the Marseille order) and names. Created by an anonymous card maker in Paris. Conserved in the French National Library and dated to the early 17th Century.

Complete deck of a pre-Marseille Tarot created in Paris. Vievil started his career as a card maker in 1645. The deck is probably made in one of the first years of his active period.

Oldest-known Tarot deck of the Marseille type. Created by Jean Noblet in Paris and probably inspired by an Italian ancestor of the type I TdM decks. Jean Noblet started his activity as a card maker in 1659, the earliest possible year for the publication of this deck. 4 pip cards are lost in time.

Tarocchini deck created by Giuseppe Maria Mitelli in Bologna. Dated by the French National Library, where this deck is conserved, to around 1660. Like the Tarocchino di Bologna, this deck consists of 62 cards.

Tarot of Marseille type I deck made in Lyon. Two decks are surviving, one conserved in the French National Library and the other in the British Museum in London. The deck is dated by the Britisch Museum to the early 18th Century, other sources date the deck to 1701, just after the French King Louis XIV started to tax the card making industry. To avoid these taxes, the deck has been made as a deck for export purposes only. It is possible that the deck has been created by Jean Payen using the pseudonym Jean Dodal.

Another Tarot of Marseille Type I deck made in Lyon, this one around 1713 by Jean-Pierre Payen. The deck is conserved in the Beinecke Rare Book & Manuscript Library. Following the link, enter 2466 in the RECORD ID box and submit the search. When entering 2465, a similar deck will show up, made in 1743 by his son Jean Payen in Avignon.

A Tarocchino di Bologna deck, published in the mid 18th Century by Antonio de Maria. It is one of the first Tarocchino decks that has the four Mori instead of the Emperor, the Empress and the two Popes. The deck has 62 cards and is conserved in the British Museum.

A Tarot of Marseille Type II deck of which the woodblocks were engraved in 1760 by an unknown engraver. The Marseille-based card maker Nicolas Conver bought these woodblocks, made some modifications and published this new deck in 1809. The deck became the best known Marseille deck. This particular deck is conserved in the French National Library.

A Belgium Tarot, inspired by the Tarot of Jaqves Vievil, and created in Brussels around 1780 by François-Jean Vandenborre. The deck is conserved in the British Museum in London.

An early double-headed Tarocchino, created by an anonymous card maker in Bologna. This deck that dates from the early 19th Century is conserved in the British Museum 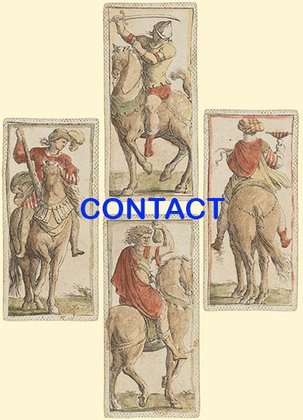