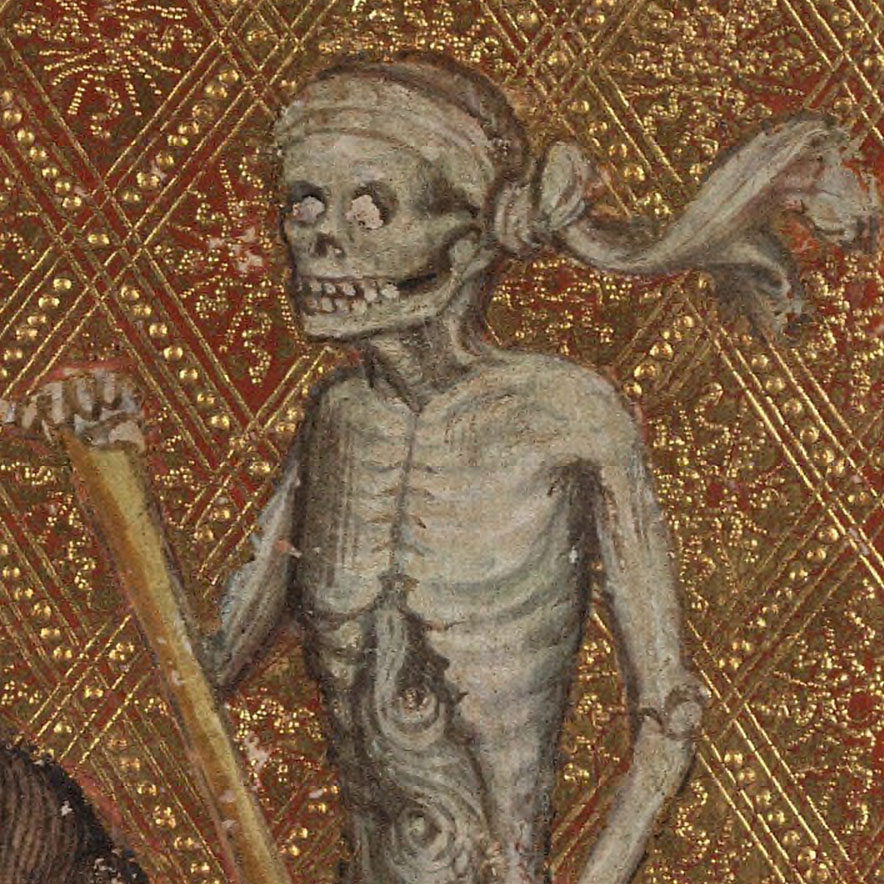 If this card has been made to fear the children of a North Italian Ducal family, the artist certainly has reached his goal. The upper body of a skeleton man. The bones still covered with the pale grey remnants of the skin. The abdominal cavity emptied of its content, the left and right parts of his chest fixed together with some rough stitches. On his head a wide scarf, symbol of the independence of Death. A horrible sneer on his face. Really, this is not a figure that you would like to cross on your path.

This card belongs to the so called Visconti di Modrone deck, also known as the Cary Yale Visconti. The deck has probably been created in 1441 for the occassion of the wedding between the condotierri Francesco Sforza and the daughther of the Milanese Duke, Bianca Maria Visconti. It is the oldest Trionfi deck we know and probably it had only 16 trump cards, of which 4 Virtues we don't find on standard Tarot decks. Three Trionfi cards representing the allegory of Death survived, two created for the Ducal family of Milan and one for the Ducal family of Ferrara. They are shown here below. 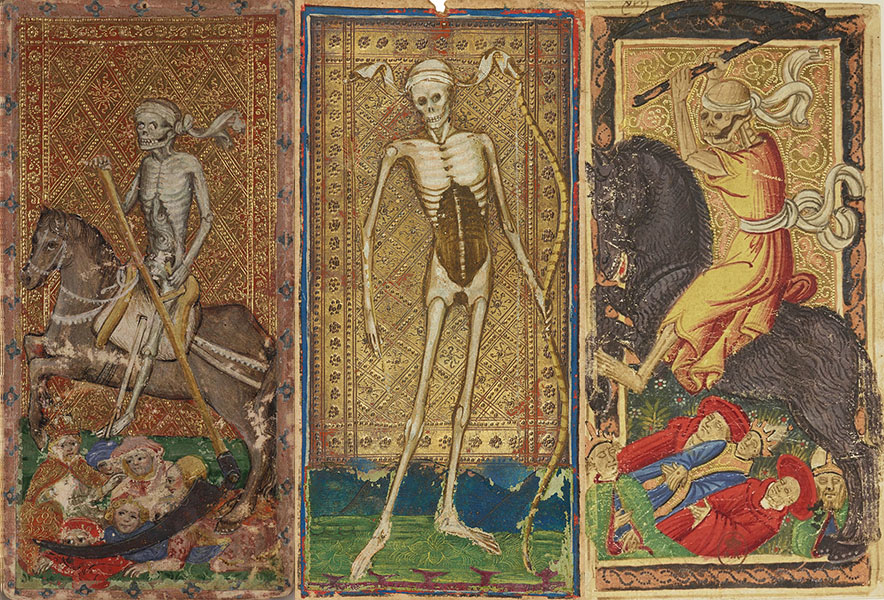 Three representations of the allegory of Death. A skeleton covered by a pale skin, the abdominal area open and the inner organs removed. All three Death figures have the white scarf of independence on their skull. Three magnificent handpainted cards with a golden background, made for very wealthy North Italian Ducal families. The first card from the so called Visconti di Modrone deck (also called Cary Yale Visconti) has been commissionned by the Milanese Duke Filippo Maria Visconti, probably in 1441 at the occasion the marriage of his daughter Bianca Maria with the Condottieri Francesco Sforza. The second card is form the famous Visconti Sforza deck and was commissionned by the Milanese Duke Francesco Sforza (or his wife Bianca Maria Sforza) in the early fifties of the 15th Century, maybe in 1554 at the occassion of the peace treaty of Lodi, that marked the end of a long war between Venice and Milan. The third card is from the so called Charles VI deck probably commissionned by the Duke of Ferrara from the Este dinasty. The deck has been created somewhere in the second half of the 15th Century, probably somewhere between 1460 and 1480.

Two of the Skeletons are seated on a horse, this is a direct reference to the 4th Horseman of the book Revelation 6:7-8 in the Bible:

7    And when he had opened the fourth seal, I heard the voice of the fourth beast say, Come and see.

8    And I looked, and behold a pale horse: and his name that sat on him was Death

With his scythe he is harvesting the souls of everyone, independent of their social status or wealth. Under the horse we can distinguish a Pope, a King, Cardinals, everyone has to recognise Death as his final master. On the Visconti Sforza card we see a lone Death represented as an archer. This was in the Middle Ages also a quite common representation of Death, as a hunter of people.

All four cards shown here are from uncut sheets found in the binding of books that date around 1500. The first two cards are from sheets conserved in the Budapast Museum of Arts. Obviously they are from the same deck. The next card is from the Rosenwald sheet conserved in the National Livrary of Arts in Washington. The last card is from the Rothschild sheet conserved in the Louvre in Paris. On all cards we see Death as the 4th Horseman, exactly as on the Visconti de Modrone and charles VI Trionfi decks. On the Budapest sheets the numbering follows the Ferrarese order of numbering, on the Rosenwald deck the Bolognese order, and on the Rothschild sheet there is no numbering. However the images on this sheet are identical to the standard Bolognese Tarocchino decks. Death is identical but mirrored with respect to the standard Tarocchino deck. But before looking at these card images, we will first have a look at contemporary representations of Death in Art. Since the Black Death pandemie in the 14the Century, that killed one third of the European population, people had a lot of respect for Death, and he was omnipresent in Europese Art of the late Middle Ages.