DATING THE PIP CARDS OF THE VISCONTI-SFORZA DECK 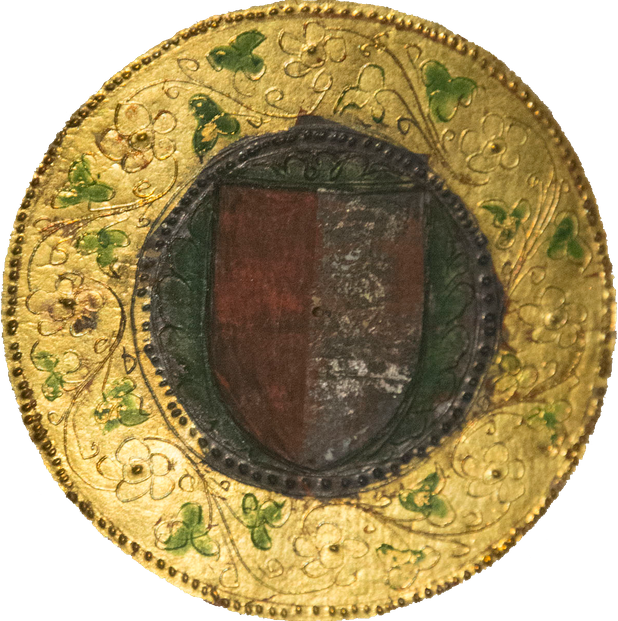 On most pages on my site I’ve stated that the original Visconti-Sforza deck is the best example we have of a trionfi deck with a 5 x 14 structure, a deck with 4 times 14 suit cards (Coins, Cups, Swords and Batons) and 14 trump cards. But, since a couple of years, I have doubts. Not concerning the structure, I firmly believe that before 1460 the 5 x 14 structure dominated. My doubt is in this specific deck, did the Visconti-Sforza deck really consist of 70 cards? In October 2015 I visited the Accademia Carrara in Bergamo, Italy, so I had the chance to see 26 Visconti-Sforza cards together. They are beautifully exposed, in a room with dimmed light, with just some side lights in their showcases. What really struck me was the lustre of the gold on the different cards, very impressive. If you see this, one is asking himself, why in the world they were so badly copied, even by leading card makers as the U.S. Games Systems Inc. On these copies the gold on the cards became a horrible brown. But, this was not the only thing that struck me in the eyes. It looked as if on the added trump cards, a much purer gold had been used. All images on this page come from photos I took myself in Bergamo. Here below, on the upper row, first the Emperor and Justice, both trump cards that were part of the original 14-trump structure. 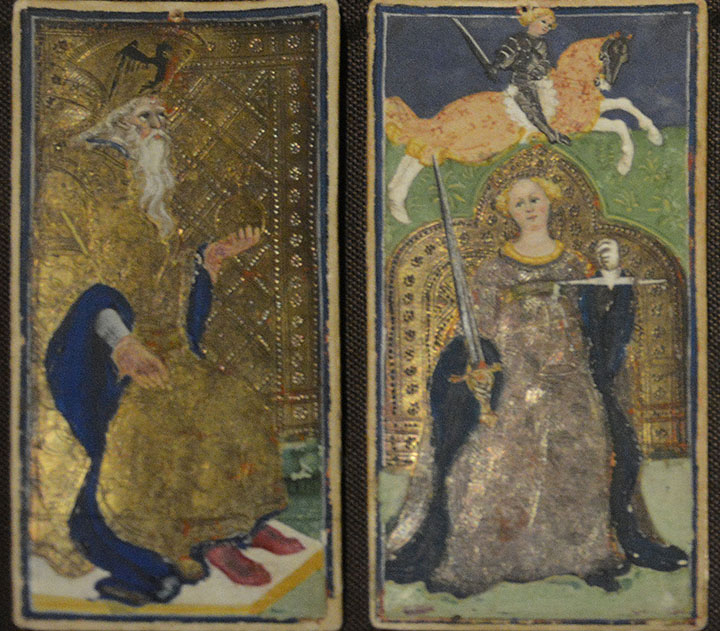 I apologize for the bad image quality, the extremely dimmed light conditions were not really good for taking pictures, and flashlights were prohibited. There was even another visitor that made remarks about the noise of my camera, so you can imagine the magical atmosphere that was (and still is, I hope) reigning in this room. In any case, you can distiguish the reflection of the lights on the golden parts on the cards. When moving a little bit, this reflection was moving, so the cards where glittering, really fantastic. On the next row we see two examples of added trump cards, the Star and the World. 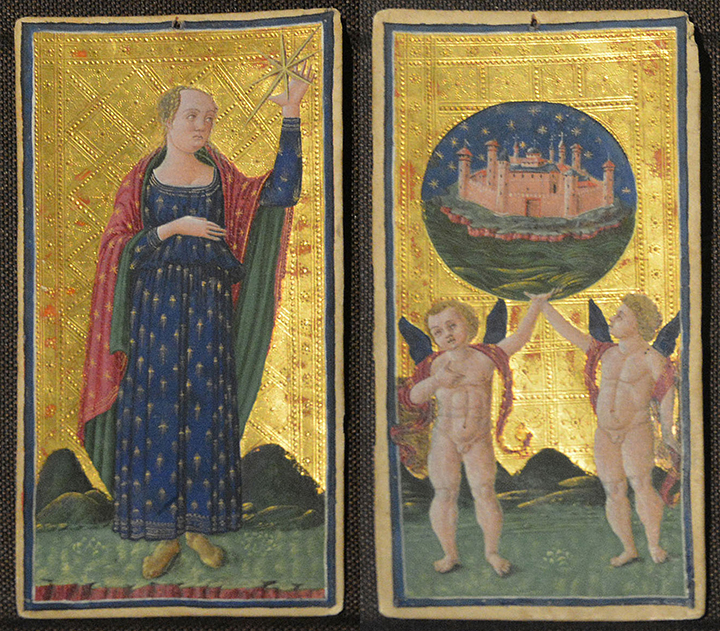 The difference jumps in the eye. The as I suppose purer gold that was used, reflects so much light that even my photos became a little bit sharper. This different lustre of the gold leaves cannot be ignored, these cards were really made at a later moment in time. As we know now, this was at least twenty years later, probably even some years more.

The court cards have the same characteristics as the older trump cards. Here below the Page of Coins and the King of Cups. 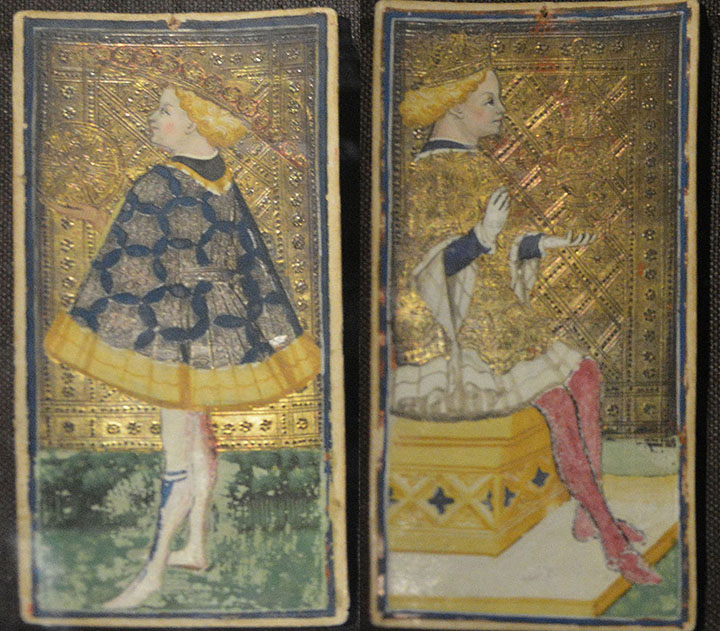 I also show the Knights of Batons and Swords. Maybe this may end the discussion about the colors on the shields. I is just red and grey (maybe silver, I cannot remember this detail), there is no gold on these blazons. 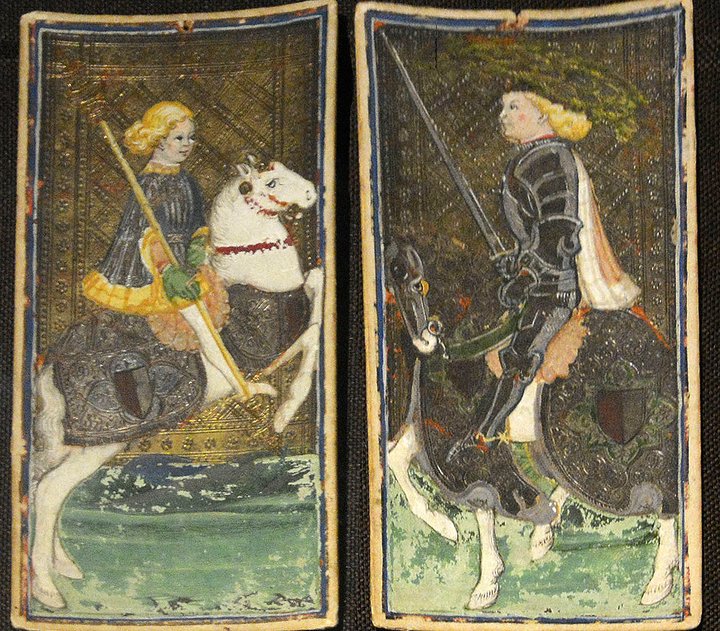 There is no doubt possible, these cards have been made at the same time as the original trump cards, using the same type of gold leaves. But, as suggested by the coin leading this page, extracted from the Ace of Coins, the pip cards also have a story to tell. Here below the 2 of Cups and the 5 of Coins. 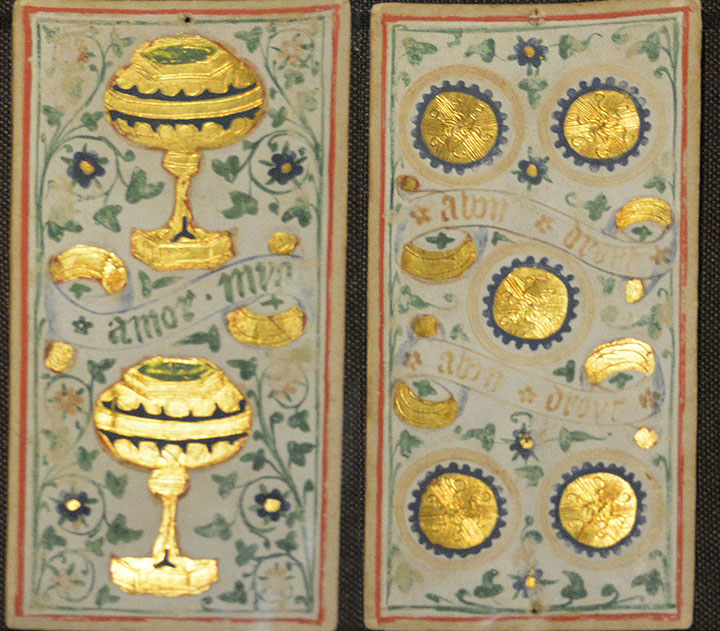 The pip cards have exactly the same lustre as the added trump cards. I was astonished by this, the most plausible conclusion for me was that the pip cards were made at the same time as the added trump cards. This possibly also explaines why the pip cards of the Visconti-Sforza deck don't have the same silver hammered background as the Visconti di Modrone and the Brera Brambilla decks. When the missing trump cards were added, we are at least 30 years after the creation of these two decks, that both have silver hammered backgrounds. Silver is not as noble as gold, gold does not rust, but silver is slowly oxidating over time. The descendents of Filippo Maria Visconti must have remarked this, and maybe this is the reason why they opted for a painted background, using only gold leaves for the suit symbols and for decoration, and no silver at all.

But why were the pip cards left out on on the original Visconti-Sforza deck ? It is evident that the hand painted Trionfi cards were not made for game playing. Except for maybe some educational purposes, they were made for showcasing the importance of the family who commissioned the decks. We know that Filippo Maria Visconti was extremely rich and that he adored card games, this is why he commissioned several Trionfi decks. The first one was the Michelino deck that he commissioned somewhere in the early twenties of the Quattrocento. No cards survided, but the existence of the deck is very well documented. For his wedding in 1441 he commissioned the Visconti di Modrone deck, a splendid deck with at least 80 cards (16 trump cards and in each suit 6 court cards and 10 pip cards. Short before he died in 1447, he commissioned the Brera Brambille deck, also here with all the pip cards present. Bianca Maria Visconti certainly also loved card games, but her husband, Francesco Sforza, didn't. For him the trump and court cards were probably sufficient to showcase the importance of the Sforza Visconti family. That might be the reason why Bianca had to be satisfied in 1454 with a 30 card deck (14 trump and 16 court cards). Bianca was very close to the Este family, and at the occassion of the wedding of Duke Ercole I in 1473, a Trionfi deck was realized, also without one single pip card (but with the highest trump cards, missing in the Visconti-Sforza deck). And maybe these decks were not alone in restricting themselves to the trump and court cards, from several other Trionfi decks, like for exemple the Rothschildt deck and the oldest Lombardy deck, not one single pip is known.

In the period between 2020 and 2022 there has been an extensive study carried out about the composition of the pigments and metals covering the Milanese Trionfi cards (Visconti di Modrone, Brera-Brambilla Visconti and the Visconti Sforza decks), initiated by the Morgan Library and Museum. For me the most interesting information was that, on the original set of trump cards and court cards of the Visconti Sforza deck, an alloy of gold and silver has been used for the gold leaf on their golden backgrounds. On the six known added trump cards, this gold leaf consists of pure gold. And also, the gold leaf used on the pip card symbols has been identified as pure gold. For me it is clear, no sensible person will use a gold-silver alloy on the trump and court cards and at the same time more expensive pure gold on the pip cards. This completely rules out that they were ordered by the same person at the same time. While the same type of gold leaf as on the pip cards has been used on the background of the six known added trump cards, this is a strong suggestion that these cards were made at the same time, and as such they are a great support for the theory I exposed here above.