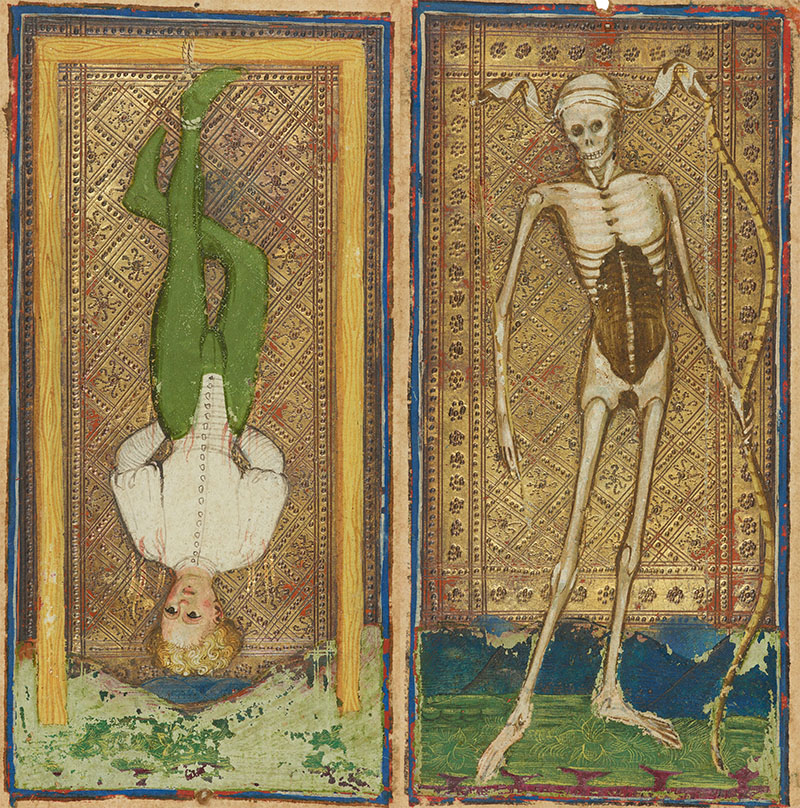 In the Tarot, the last part of the Journey of the Soul through human life, is symbolized by two special cards. The first of them is called Lo Impichato. In modern Italian it is written as impiccato  that means the hanged man. Other sources call the card the Traitor. On the Visconti Sforza deck, we see a young man hanging upside down, tied by his left foot to some sort of wooden frame. His right leg is bend behind the other, together they form a cross. His hands are tight between his back. The man has clearly a big problem. He is in a bad situation and can do nothing to solve it.

As for some other images in the Tarot, the original roots of this image can probably be found in religious art. In the figure here at the right, a detail of a fresco painted in 1410 by Giovanni da Modena. The fresco is depicting Hell. On many other contemporary pieces of art, people in Hell are often shown hanging, by their feed or by their neck. Here we see two damned Souls, hanged naked upside down, tied by one leg and both hands tied behind their back. The figure, from whom we see his front-side, has his left leg crossed behind the right one, in the same way as the hanged man on the Visconti Sforza deck. The fresco was exposed in public in the San Petronio Cathedral of Bologna, so the image was certainly known by the early Trionfi painters.

The same kind of image was also very much used, from approximately the 13th up to the 16th century in some sort of popular art executed on external walls, comparable with modern graffiti. Especially in Italy, this form of art was very popular under the name of Pittura Infamante, literally pictures that will remove fame. In English, they are called shame paintings, paintings intended to give shame to the persons who are pictured. 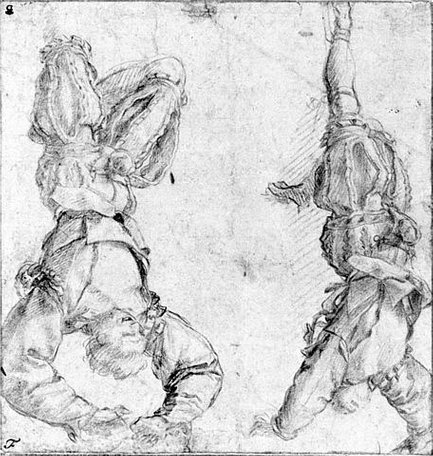 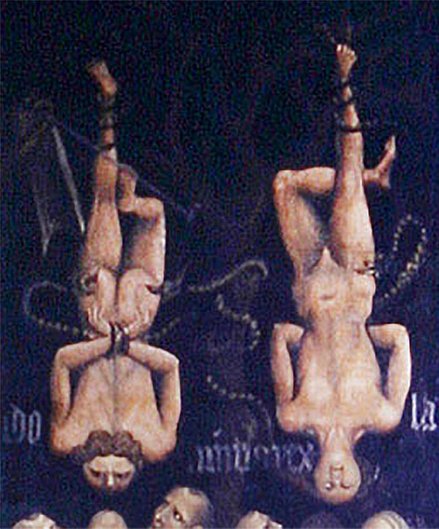 This kind of art, although examples exists elsewhere in Europe, was most commonly used in the Italian City States. In shame paintings, people were painted at life-size or bigger, hanging upside down tied by one leg. These paintings were ordered by the authorities and executed on public places where everyone could see them very well. These paintings were often executed by renown painters, to ensure that the hanged people could be recognized easily. On these paintings, important people, most of them belonging to the nobility. These people were in conflict with the local authorities, but the local authorities had no real power against them to do something. Especially often depicted on the shame paintings were the condottierri, powerful man with significant armies who changed from side as easily as you and me change your shoes. It is known that Francesco Sforza and his descendants, had ordered several times the realization of shame-paintings, to accuse some of their opponents in public. They had a short memory, Francesco Sforza and his father Muzio Attendolo were famous condottierri themselves. 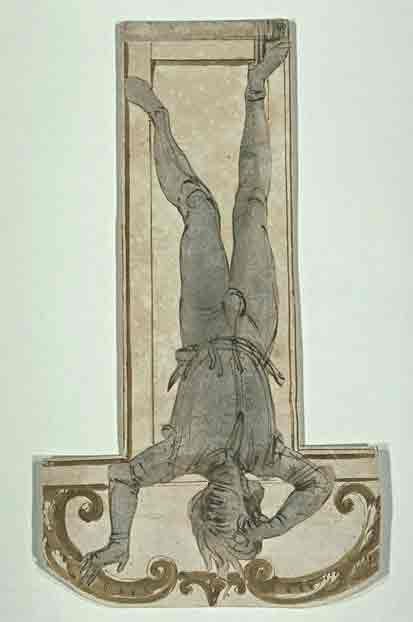 The Hanged Man in the Tarot is apparently not a shame painting, nor does it depict a scene from Hell. But certainly the Italian Tarot artists found inspiration in these well-known expressions in art. Just as the shame painting was made for a specific purpose, the Hanged Man had its own role to play. In the Tarot it symbolizes serious misfortune, your life has been irreversibly reversed. Maybe the Black Death knocked at your gate, you got a bad accident, your wife died, you got a serious illness, you lost your job, in any case, your life will never be the same, and you have to be prepared for the next step, the transition to Afterlife. Note that the mountains in the background reappear to reinforce these difficulties and that there is a blue mountain directly under the head of the Hanged Man symbolizing the difficulties that he has to accept this new situation.

The following card on this level is Death, symbolizing the effective transition to Afterlife. He has in his hands a great now and an arrow, and on his face a great grim. That this period of transition will not be easy to accept is again symbolized by the blue mountains in the background. Where the eyes should be, the skull of Death is empty, he is considered in that period as the third blind power after Love and Fortune. Note that Death is wearing a white headband on all surviving hand-painted decks. This white headband, that we find on all surviving hand-painted death cards, is a symbol for independence, Death is stronger than the strongest king. With the Black Death still active in many parts of Europe, Death was a preoccupation of everybody. The next victim could be yourself.

Shame painting were executed on outside walls, and they were not intended to resist time. If the situation changed, the wall was repainted and the shame painting was gone. Otherwise, time would take care of the painting. Not one single example has resisted the elements. We know only some rare sketches that served as a study for the final paintings. As an example, in the above figure, the study of Andrea del Sarto for a shame painting he executed in 1530. Even from Botticelli, it is known that he has made shame paintings, but there are no surviving sketches attributed to him. In the figure here below another example, a small drawing made in the late 15th Century by Fillipino Lippo. The drawing is conserved in Paris in the Louvre.

The bow and arrows are not a usual symbol as an instrument of Death, but it is used in the Bible to indicate one of the instruments of Death and Justice used by God (Psalms 7):

11. God judgeth the righteous, and God is angry with the wicked every day.

12. If he turn not, he will whet his sword he hath bent his bow, and made it ready.

13. He hath also prepared for him the instruments of death he ordaineth his arrows against the persecutors.

Death clearly symbolized the end of Human life. It was a subject that preoccupied Filippo Maria Visconti a lot. Many of his ancestors were murdered or died suddenly of the Plague. Death was everywhere, and it could attack at any moment of time. Filippo Maria had spies all around to protect himself and his family to intrigues from outside. He knew that this alone was not sufficient. On second Christmas day 1441, his close friend and ally Niccolo III of Este was murdered when being a guest of Filippo Maria Visconti himself, poisoned by the Christmas meal they shared.

Death knocked every day at the door in Renaissance Italy. One day, you were in good health, the next day you could be buried or being on the way to be. The Black Death ravaged Europe from the 14th to the 17the Century.  Everybody lived with the risk to die at any moment. Here below, a detail of a contemporary painting of Pieter Bruegel the Elder depicting the triumph of Death. 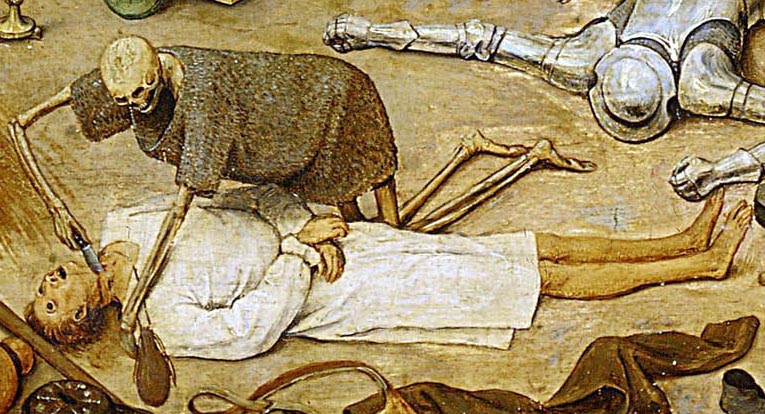 The journey of the Soul through human life, as described by the Visconti Sforza deck, has not only its sources in the Bible and in religious art. Its structure has a much older source of inspiration. The famous work “The Republic” of the Greek philosopher Plato had been recently translated in Latin, and Filippo Maria Visconti had certainly a copy of this translation. In this work, Plato describes his search for Justice in the form of a conversation with Socrates, the most famous of the Greek philosophers, who had died when Plato was still young. For Plato, the Human Soul consist of three levels and the State was constructed in the same way. In the Middle Ages, we found these three levels of the State in the Estates of the Realm. However, it is not exactly the same, Plato divided the State in Slaves, Free man and Warriors, but the principle is there. According Plato, the levels of the Human Soul are as follows:

The lowest of the three levels is what Plato calls the Soul of Appetite. On this level, you need to master your desires. To achieve this, you have to practice the Virtue of Temperance.

The second level is the Soul of Will. Here you learn to have responsibilities and to protect the weaker than yourself. To achieve these objectives, you have to practice the Virtue of Strength, in this context the equivalent of Courage or Moral Strength.

The search level is the Soul of Reason. On this level, you are searching for wisdom to be able to advise those who are less wise than yourself. To achieve wisdom, you have to practice the Virtue of Prudence

Once you are mastering Temperance, Strength and Prudence, you are ready to practice the greatest Virtue of all, Justice.  In the Visconti Sforza deck, Love and the Chariot correspond to your desires, to the Soul of Appetite. To affront the hazards of life, Fortune and Time, you need a lot of courage. This corresponds to the Soul of Will. And finally, to accept Misfortune and Death you require wisdom. We are at the level of the Soul of Reason.

Now, having combined symbolically the Virtues Temperance, Strength and Prudence, we can make the following step and proceed with Justice.