PAIR 2 - TIME IS TICKING, YOUR DESTINY IS SEALED 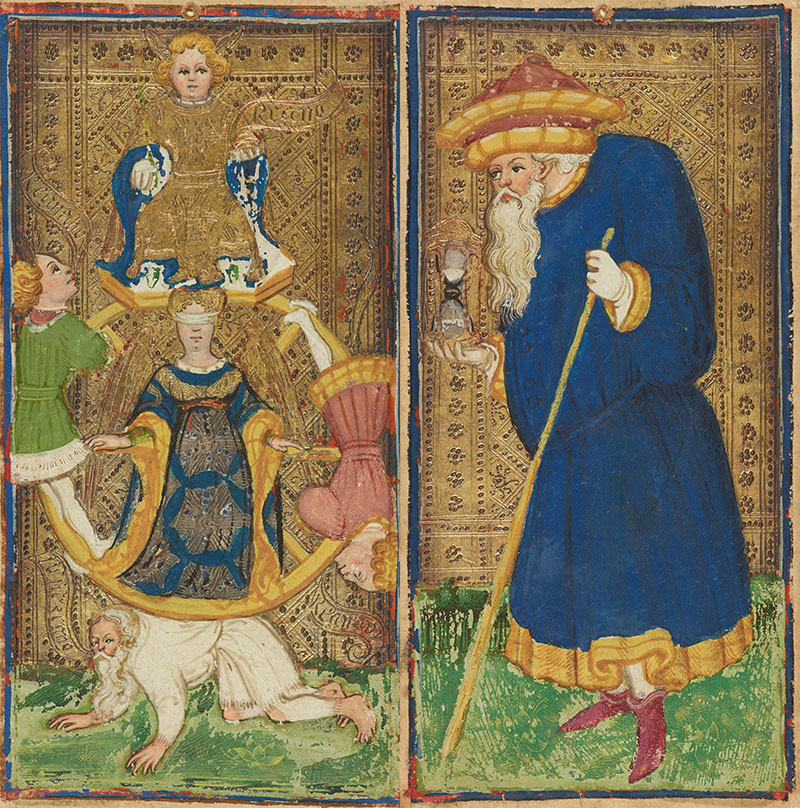 The second pair of the second level in the Visconti Sforza represents Destiny and Time, you need a lot of moral strength and courage to accept your Destiny and face the effects of Time.

The first card is originally called La Rotta what means literally the Journey. This word was mostly used to indicate the journey of a ship, but in this special context it relates to the Journey of the Soul through human life. On the first card we see a winged and blindfolded Lady, apparently Lady Fortune, standing in front of a Wheel. A King with the body of a child and the ears of a donkey is sitting on a very unstable platform on top of the wheel. There are text balloons next to all persons around the wheel and the King is saying “I reign”. On the left side of the card, representing the past, a boy, also with donkey ears, is trying to climb the wheel. He says, “I will reign”. On the right side of the card, the future, a boy with the tail of a donkey. He says, “I have reigned”. Below the wheel, an old man on his knees with his hands on the ground. He is carrying the burden of the wheel on his back, and he says, “I have never reigned”. It is the Commoners who carry the burden of the Wheel. Without Commoners, no leaders. And without leaders, no struggle for the Top. This representation of the Wheel of Fortune is very traditional. Here below the same representation in a 13th century manuscript,  known as the Carmina Burana. 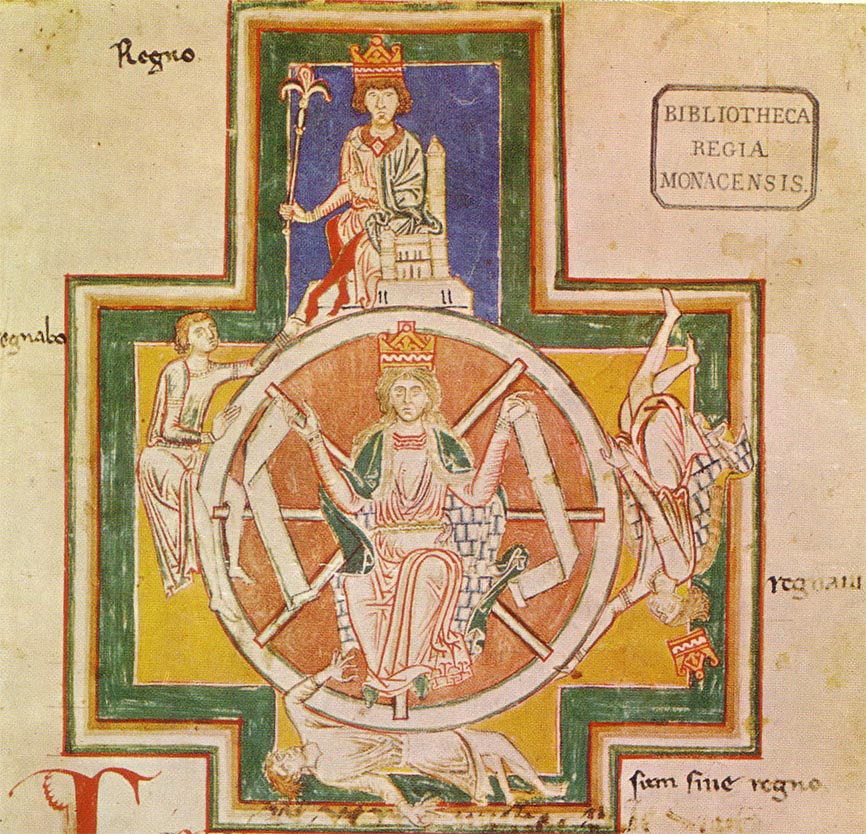 The drawing in the manuscript is simply the same, with the same text next to the different figures. On the card, the figures have been replaced by children to make the card more attractive for the children of Francesco Sforza and Bianca Maria Visconti.

In the Brera-Brambila deck, the last deck commissioned by Filippo Maria Visconti, we see the same drawing again, but without the text boxes.  The message of Lady Fortune is clear. Some people have luck and other's don't. But even if you have luck, the day will come that luck turns away from you. The Wheel is turning. Every day people are fighting for Power, and every day so-called leaders will lose power. Live is a cyclic process with up and downs, repeating itself again and again.

Lady  is after Love the second of the three blind powers. She is blindfolded on the card to indicate that good luck and bad luck act in the same way for every person on this world. The Wheel of Fortune is representing that life is a cycle, with good and bad luck acting randomly. Today you're a King, tomorrow you might be a beggar, no place in life is eternal, any title that you obtain will be lost one day or another. So you must be humble, be prepared for the better as well as for the worse.

The same old man as shown on La Rotta is portrayed in the next card, called El Gobbo (the Hunchback). His curved back and long beard indicate his high age. The old man is wearing long blue clothes, bordered with golden fur. He is wearing a great red and golden hat, and he holds an hourglass in his hand. The hourglass is a strong symbol. The sand in the upper part of the hourglass is symbolizing the time you have left over before you will die. The sand in the lower part symbolizes the time that has passed away and that will never come back. The hourglass indicates that your time continues to pass away, and eventually will stop. Don't waste the time that is left for you. As a more positive point, the hourglass symbolizes, like the Wheel of Fortune, that even if the life of a single person might be linear, the process itself is cyclic. When the upper part is empty, the hourglass can be turned over and a new life is starting again. 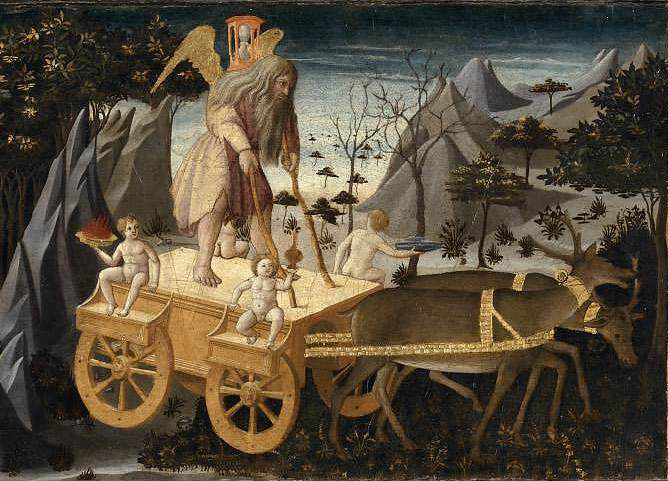 Like on the card, the old man has an hourglass to represent Time. The old man symbolizes Father Time himself. Time is acting on everybody and is stronger than the strongest army.

Again we have a closely related pair. The Wheel of Fortune indicates that one day you can have a good position, but inevitably, with time, this “luck” will pass to someone else. Father Time is emphasizing that time is ticking. Nothing can stop the progress of Time and one day or another, everybody has to face the consequences of aging. Both cards emphasize that life is a cycle. Things will happen again and again. The Wheel of Lady Fortune keeps turning around and around. The Hourglass of Father Time, once emptied, can be turned upside down to start the same cycle over and over again.