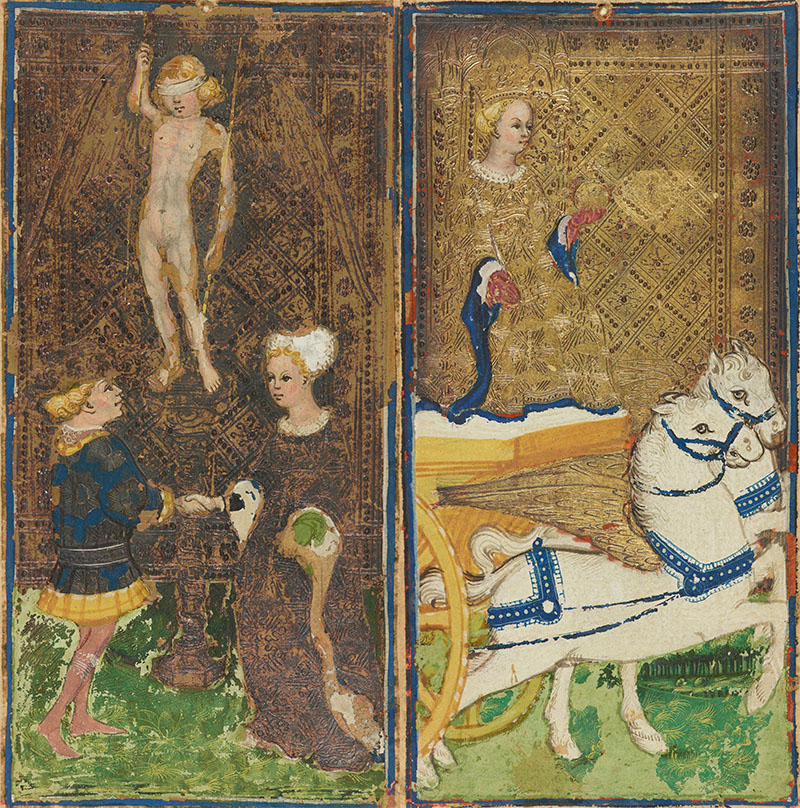 In the above figure the cards from the Visconti Sforza deck, painted some 10 years after the Visconti di Mordrone deck. Both cards link directly back to the corresponding cards on the previous deck. On the card generally called the Lovers, we see the same persons as on the Visconti di Mordrone, Francesco Sforza and Bianca Maria Visconti, here renewing their contract of marriage.

The scene has now been reduced to the couple shaking hands and Cupid standing on a pedestal. Cupid has also grown ten years. Being just a toddler on the Visconti di Modrone deck, now he is a boy of 11 to 12 years old. He is still naked and blindfolded andfor all these 10 years he was just a powerless spectator. He was waiting all those years and could never interfere. He doesn't fly any more and is just standing and waiting. But it's hopeless for him, the two people on the card are still controlling themselves. Both people are not really loving each other, the age difference is too big. Francesco keeps loving women outside his marriage and he keeps getting illegitimate children. But, within his marriage he respects the contract, both are responsible within this framework. When the deck is made, they have already four children together and they live a relatively happy family life. His marriage with Bianca Maria will last until they die.

The second card is also almost identical to the Visconti di Modrone. Bianca Maria is again portrayed as the queen on the Chariot. The horses don't need a boy anymore to guide them, now they have wings. Remark that in that period horses were symbols of strength and wings symbols of the human Soul. The winged horses symbolize thus the Strength of the human Soul, the force to moderate yourself in all aspects of life. The victory insinuated by the Chariot is the victory over yourself, a symbol for your ability to be moderate in all aspects of life, being it sex, food, luxury, power or anything else.

It is clear that the symbolism of the Trump cards has evolved since the Visconti di Modrone. The card called Love is clearly not a representation of the Triumph of Chastity anymore. Even if Francesco Sforza continues to sleep with other women, he loves his wife. Bianca Maria knows her husband very well. She is a tolerant woman and she respects him. For her their marriage is more important than knowing everything Francesco is doing. She is happy with her life as Duchess of Milan and as a mother of her children. The love they feel for each other is more like a mutual respect and understanding. It is something that has grown over the years. They have never needed Cupid to intervene in this process, love as a desire has no place in their relation. Their marriage is still a marriage of reason, but it is a happy one. The Chariot also has evolved. We can not compare the respect that Francesco Sforza had for his wife with the real love that Fillipo Maria Visconti had for his only child. What we should retain here concerning these two cards is that the Lovers and the Chariot form one single pair and that they represent together the inner force of an individual person to control his proper desires. The Lust of Love on the first card and the Lust for Power and Luxury on the second card.

We have also to retain, that every cardmaker had his own relation with the cards, a relation he has expressed in the images. Even when the seventy eight images become some sort of standard, like the Tarot of Marseille or the Rider Waite deck, individual images continues to evolve, names keep changing and the structure within the trump cards also changes over time. Even the suit symbols are not stable. Look to the suit of batons. They start their life in the Trionfi decks as Arrows associated to Air. Then they become living wood associated with the Energy of Life. Next they are reduced to firewood and will be associated with the Energy of Fire. Later it becomes living wood again, but now it will be seen as vegetation and associated with Earth. Every deck is different, Tarot decks are like human beings. Even twins will never be identical. And this is what makes Tarot so fascinating, what makes its history so rich and full of surprises. So forget the so called standard deck, there is no standard deck. And forget the general accepted idea that the Italian handcrafted Trionfi decks were just nicely painted images to amuse the rich. There is a whole filosophy behind these cards. They are not the same in the way most people think of Tarot today, but be sure, there was a whole lot of thinking behind their creation.

We will come back later on this concept of diversity within unity in the section where we deal with the suits and with the individual cards.