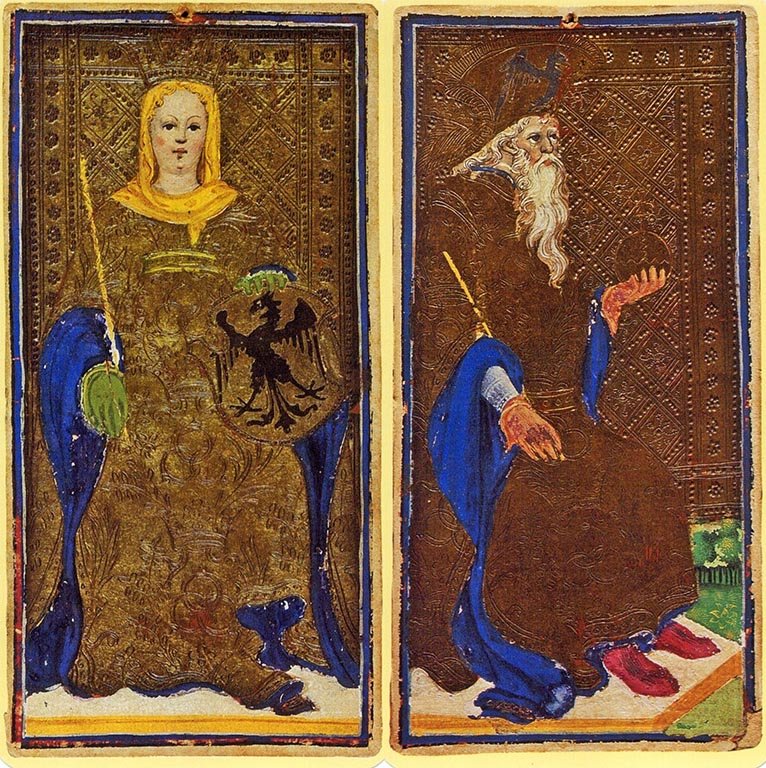 The second pair in the Estates of the Realm was Nobility. Present on the earliest Trionfi decks like  the Visconti di Modrone, it became a tradition to picture the Emperor and the Empress on the Trionfi decks. What is a better symbol to emphasize the moral responsibilities and the important place that the nobility had in the world, than to show the Emperor and the Empress, first in the hierarchy of the nobility. The Emperor and the Empress were not really controversial figures. Milan was part of the Holy Roman Empire and Gian Galeazzo Visconti had been made Duke of Milan by Wencelas, King of the Romans. The Este family was not only Lord of Ferrara, part of the Papal States, but also Lord over Reggio and Modena, territories that were part of the Holy Roman Empire. The last Emperor, Sigismund, had visited both Milan and Ferrara. And also the relationship between Borso of Este and Frederic III, the actual King of the Romans was good. One of the first acts of Frederic III, when he became Emperor in 1452, was to raise Borso of Este to the status of Duke of Ferrara. But that is another story. 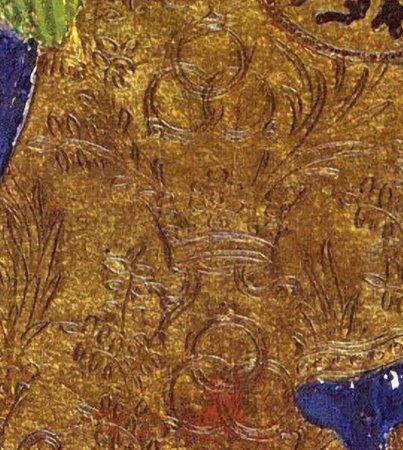 In 1451/1453, a probable period for the creation of this deck, Frederic III was still King of the Romans and not yet Emperor. We see the Emperor here in profile, he is not facing the present any more. For the Italian aristocraty, the Empire is an aging institute and its power is reducing. The triple ring and the Piumai on the blue and golden cloths of the Emperor and the Empress (here at right) symbolize the Sforza family. In fact, Francesco Sforza became on his own force Duke of Milan. His relation to the Holy Roman Empire is not at all as close as in the time of Visconti. Gian Galeazzo Visconto, could buy in 1395 the title of Duke of Milan from Wenceslaus, King of the Romans, because he was wealthier than this Emperor pretender. Francesco Sforza became Duke of Milan on request of its population, after a three years long war against other pretenders to the Ducal title. So these cards clearly indicate how the Sforza's thought about the Empire, an old and rotten institute. The real power over Milan was with the Sforza family, and the Empire could nothing change about this fact.

Bianca Maria Visconti could have replaced the Holy Roman Empire with the Duke of Milan, but this would have been in contradiction with the educational purposes of this deck and certainly also with the decks of Ferrara. In any case, her husband Francesco Sforza was not the man seeking for personal glorification. When he entered Milan to become the new Duke, he did not organize a triumphal procession, instead he distributed bread under the starving population. So the Emperor it would be. In agreement with the tradition of the Trionfi decks such as they had been produced for the last 10 years, the Emperor was conserved in the Visconti Sforza deck. In removing the children, changing his posture, his age and the heraldic devices, the artist emphasizes the diminishing power of the Empire in advantage of the power of the local lords, not to say in advantage of Francesco Sforza. On the Visconti di Modrone, one of the boys around the Emperor has written “A bon droyt” on his tunic, to emphasize the respect of the Visconti for the Empire, now the Emperor and Empress clothes are covered with Visconti and Sforza devices to emphasize that the Empire had to respect the Duchy of Milan. A further hint why the Emperor is portrayed as an old man will be given in the section about the Third Realm.