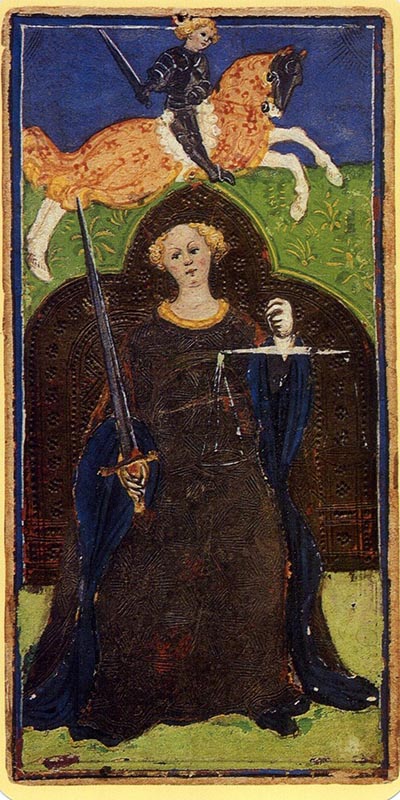 The Tarot having its roots in Christian culture, the numbers three and seven are essential. Three, referring to the Trinity, so to God himself, and seven referring to  the Creation. Until now, we have seen two groups of three pairs. They are the six days of creation. For every group, we need a seventh card, completing the set. At the same time, this card must trump over all previous cards.

What is a better card that fulfills these requirements than Justice. Some Popes have been put on trial and were condemned, like the antipope John XXIII in the early fourteenth Century. Justice is equal for every human, independent if he is a poor criminal, a King or a Pope. Sooner or later, every criminal will be punished, be it on Earth by a court of justice or be it in Heaven in the last Judgement.

Justice is presented in the traditional way, with the balance symbolizing that Justice will weight all arguments,  good and bad. The sword in her right hand is symbolizing her authority and that her decisions are final. Behind her a knight on a horse who will execute these decisions.