Without considering for this moment the details of the individual Trump cards, let us first have a look at the structure of the fourteen trumps of the Visconti Sforza deck. There are two groups of seven cards, the first one we will call the Estates of the Realm and the second one, the Hardship of Life.

Society is divided in three levels, Commoners, Nobility and Clergy. Here at the right, we see a 15th Century German representation of the Estates of the Realm, as this Medieval structure was called. Everyone is born as a Commoner or as a Nobleman. Exceptions there are, but the rule is that you will die on the level where you are born. Commoners and Noble people can enter the Church and become part of the Clergy. Here also, there is a difference. We have the lower clergy, consisting of monks, nuns and priests, and a higher clergy consisting of abbots, bishops, cardinals and the pope. Once again, exceptions there are, but normally, commoners would stay in the lower clergy, and noblemen will enter the higher clergy. Officially the Clergy had no right to marry nor to get children, but if this happened (and it happened rather frequently, especially within the higher clergy), these children will belong to the level where their father was born. The way the Estates of the Realm are presented in the Visconti-Sforza deck (and probably in all other Trionfi decks produced in the middle of the 15th Century), is described in the section following on the next page. 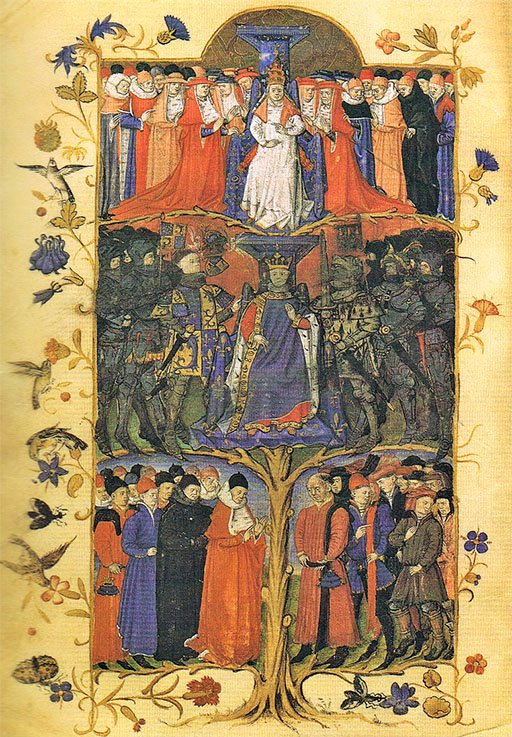 GROUP 1 - ESTATES OF THE REALM