THE VIRTUE OF PRUDENCE AND THE WORLD 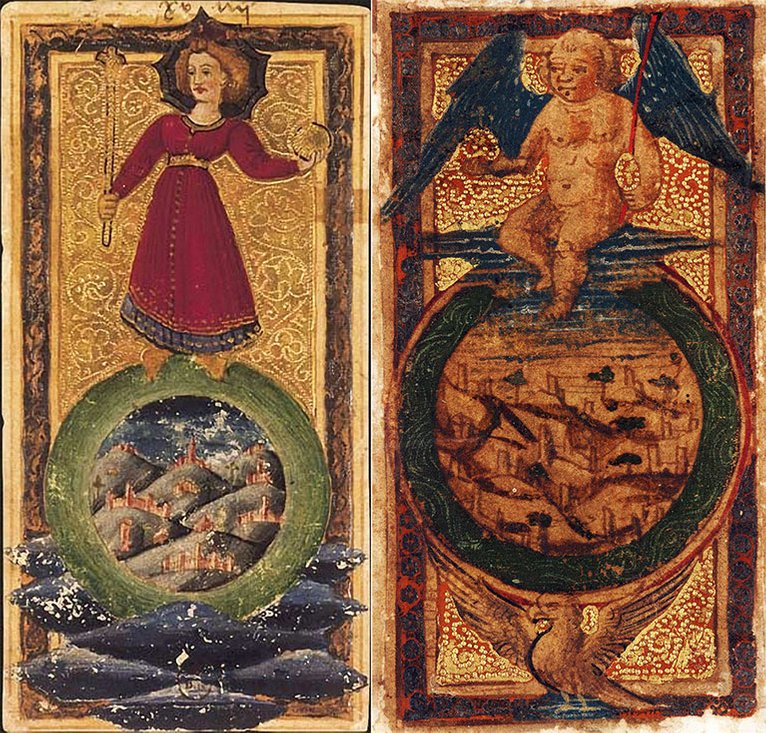 On the left card, coming from the Charles VI deck, we see the Virtue Prudence standing on the Disk of the World. The World is represented as an undulating landscape with many walled cities. The landscape is surrounded by the seas. The disk is supported by a group of dark clouds. Like all the Virtues, Prudence has a black Halo. In one hand she holds a mirror, a scepter in the other one. Prudence is the equivalent of Wisdom. She is associated with the element Earth, and in showing the Earth on this card, the Este court let it represent our Universe, the Creation in all its facets, our entire existence.

On his marriage deck, Ercole I presents the Universe as the central object of the card. The disk is now supported by an Eagle, and Prudence has been replaced by a naked boy angel (a putto), holding the Orb of power surmounted by the cross of Jesus in his right hand and a mirror and a small wand in his left hand. The angel and the eagle belong to the four living creatures as described in the Bible, Revelation 4:6-9

four beasts full of eyes before and behind.

and the third beast had a face as a man, and the fourth beast was

8. And the four beasts had each of them six wings about him ; and they

were full of eyes within: and they rest not day and night, saying,

which was, and is, and is to come.

9. And when those beasts give glory and honor and thanks to him

that sat on the throne, who liveth for ever and ever,

In symbolizing the Creation by the disk of the World and in referencing to the living creatures, Ercole I references directly to the Glory of God, from the Seeds of Creation unto the Ends of Time and continuing in Eternity. God on his throne, surrounded by the four beasts, is frequently used in religious art. In the next figure, we see this scene with the four winged creatures that symbolize the Four Evangelists surrounding Christ in Majesty, on the Romanesque tympanum of the Cathedral of St. Trophime in Arles. The sculpture in the tympanum above the entrance has been realized around  1180-1190. 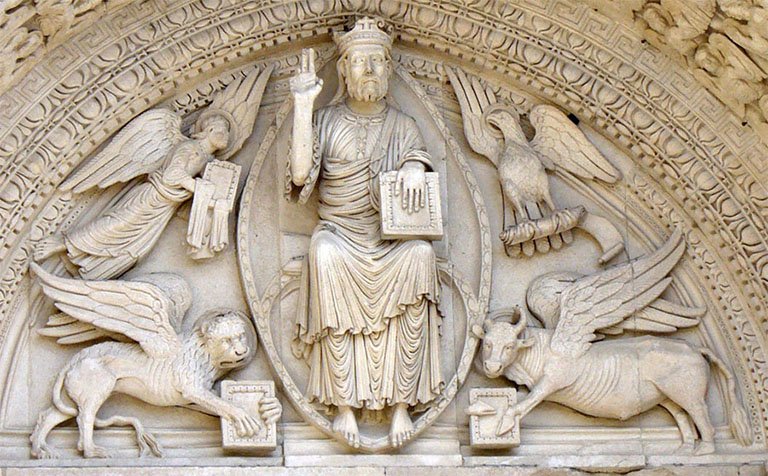 With the World, the cycle is closed, and the Human Soul is ready for eternity.

In Milan, Ludovico Sforza became regent over the Duchy in 1476 when his brother Galeazzo Maria Sforza was murdered. The new Duke, Gian Galeazzo Sforza was at that time still a small boy and only seven years old. Considering his taste for the fine Arts and his excellent relation with Ercole I of Este, it is very well possible that it was Ludovico who commissioned somewhere during the last quarter of the 15th Century (according to some specialists probably from an artist in Ferrara) the remaining cards to complete the structure of the Visconti Sforza deck.

What do we learn from the development of the Trionfi decks?

We learn that the Tarot is a living organism, with parents, grandparents and ancestors further away. With every new generation, the Tarot changed. The number of cards varied, the illustrations themselves took some time before they looked like their actual descendants, produced today. And even illustrations that have an obvious meaning for us, might have had originally other significations, slightly or entirely different. A Lovers card, originating from the Triumph of Chastity, the Chariot of Victory that had his origin in the Triumph of Love, who could ever imagine this? Maybe it makes no sense, maybe it does.

Nobody can claim that he has the only truth. Our knowledge about the past is developing every day. And thanks to the Internet, many centuries old documents become available for consultation by anyone who desires. But be aware, the Internet is a very dangerous medium. Many false and misleading messages based on nothing are communicated every day on the Internet as being the one and only truth. One has to be prudent and check its sources, double-check and check again. Never ever rely on one single source, nor on two, not even on three. They can all have the same false information as origin. Take as an example Tebaldo Visconti, who became Pope Gregory X and Teobaldo Visconti, ancestor of Filippo Maria Visconti, who lived and died in the same period. Not one single source gives the slightest evidence that these two persons with almost the same name were related. Coming both from Lombardy and having both as family name Visconti is not enough to be sure. To make it more complicated to differentiate them, both died in 1276. For this reason, many sources confuse them and some “very reliable” genealogy sites state that these two persons are the same, which is far away from the truth. They had 10 years of difference in age and were born in different places. The town of Piacenza, where Pope Gregory X was born, was not a Milanese territory at his birth. It became a Milanese Visconti territory long after the Pope, who spend a great part of his life in the Low Countries, had died.

So be careful. Even if my words in these pages might suggest at some places that I am talking about historical evidence, this is not always true, be careful. The way I speak is because of ease of language. To repeat every two words that historical sources are not always reliable, or that for certain statements I was inspired by the cards themselves, is very annoying for the reader and kills the story. So, I repeat, my information comes on one side through the Internet and on the other side from the cards themselves. I'm living far away from Europe and I never ever had the opportunity to see one single historical document proving any of the things I am telling here. Certainly, some facts are real. The Visconti existed, the Estensi existed, the historical Trionfi cards that survived the centuries are there, there is at least some historical basis and evidence for most things I say. And if any doubt exists, I'm ready to change my story. Any new evidence can only enhance it, correct some of my wrong assumptions or other errors, and bring us closer to historical reality.

To advance, it is better to say what you think than to say nothing at all. All great advances in humanity were caused by inspiration of individuals and by subsequent hard brain work, none of them were the result of repeating the knowledge of others while giving detailed reference to the sources.  Some of the ideas I express are not mine, I only tried to present these ideas in a more convincing way (like the origin of the Popess card, the 5x16 structure of the Visconti di Modrone and the 5x14 structure of the original Visconti Sforza deck),  But others are, like the Pope on the Visconti Sforza card representing the antipope Felix V and on the Estensi deck  Pope Eugene IV.