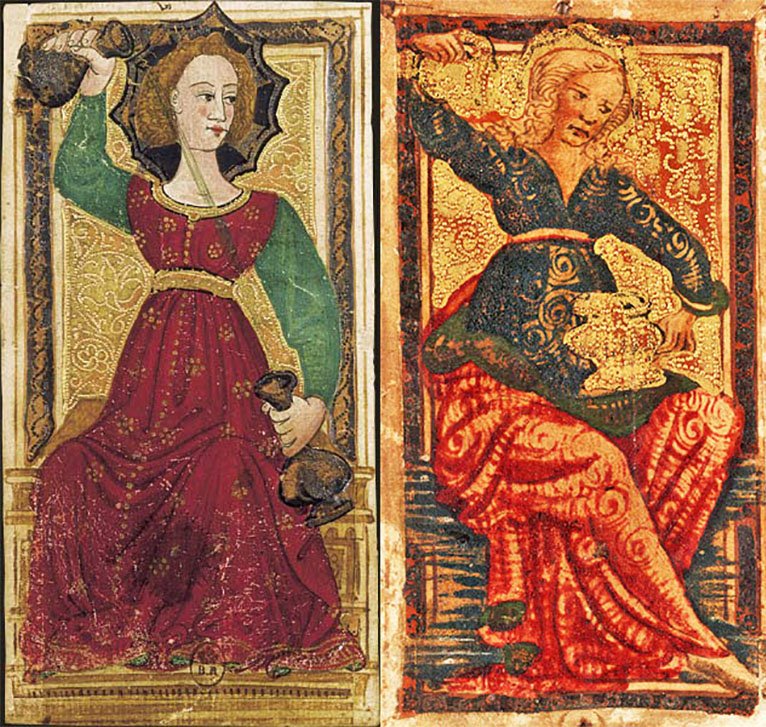 Ercole knew very well the works of Plato. I suppose he initiated a discussion about a new structure where the 14 existing cards would be preserved. The first group of six cards would symbolize the Soul of Appetite, mentioned by Plato in his work the Republic. In consequence, the Virtue Temperance replaced the Virtue Justice as the seventh card of the first group. On the card representing Temperance (here above, we see the card for both the Charles VI and the Este decks), we see a young lady pouring a liquid from one recipient into another. The liquid being poured from one recipient to another represents water that is added to wine to diminish the negative effect of the alcohol.

The second group of six cards, representing the Journey of the Human Soul through Life, symbolizes the Soul of Will, and the Virtue Strength (figure 1.2.32) would replace the Last Judgement. On the card of Strength, we see again a young lady, now with a broken pillar in her arms. This pillar is directly referencing to the Biblical story of Samson (Judges 17: 28-30):

28. And Samson called unto the Lord, and said, O Lord God,

this once, O God, that I may be at once avenged of the Philistines

for my two eyes.

29. And Samson took hold of the two middle pillars upon which the

house stood, and on which it was borne up, of the one with his

right hand, and of the other with his left.

30. And Samson said, Let me die with the Philistines. And he bowed

himself with all his might ; and the house fell upon the lords, and

upon all the people that were therein. So the dead which he slew at

his death were more than they which he slew in his life. 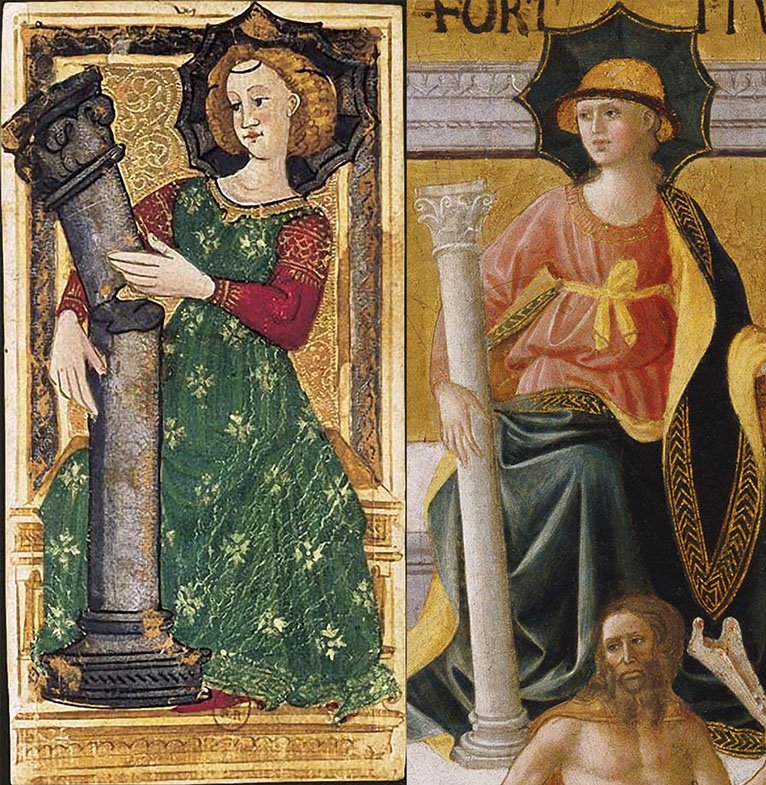 The Virtue Strength of the Estensi deck is shown together with a painting from the workshop of the Fiorentine artist Pesollino. The resemblance is remarkable; the subjects are treated in the same way. The black halo in the form of a spiderweb, the ornaments on the pillar that the Virtue Strength is holding, the position of her hand on the pillar, the ornaments on the lower border of her dress, they are all the same. It would not surprise me if the same artist has made both paintings. The Virtue of Strength symbolizes very well the difficulties we have to face in our life. So that is why I call the second group "The Hardship of Life"

THE VIRTUES TEMPERANCE AND STRENGTH