On top of the third group, the Ascent to Light, we find the Virtue Justice. Justice is portrayed here below, and again, there is a remarkable resemblance with the corresponding figure on the painting of the Florentine Pesollino workshop. 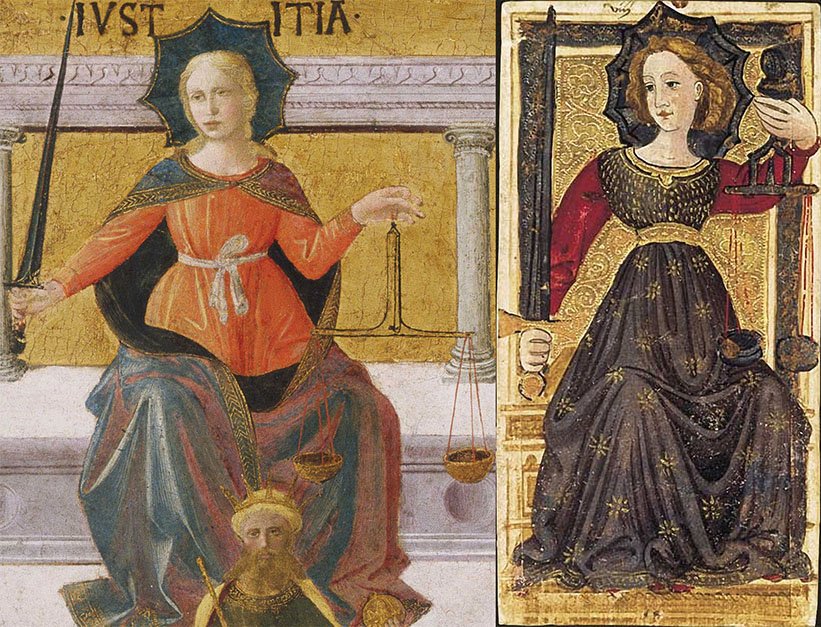 The figure on the left is part of the same painting we presented on the page dealing with the Virtues of Temperance and Strength. On the right side, we have again the miniaturized version of the Estensi (Charles VI) deck. The images are virtually the same, up to the pleats in the dress of the Virtue.  The painting is from approximately 1450. Francesco Pesollino was born in 1422 as Francesco di Staphano. He took the name of his grandfather, Giuliano Giuochi, called Pesello. To distinguish himself from his grandfather, he called himself Pesollino (small Pesello). He was raised by his grandfather and worked in his studio and in the workshop of Filippo Lippi. It was probably not Francesco Pesollino himself who painted the Virtues. He had a big workshop, and every painting produced here was called a painting of Pesollino's workshop. Pesollino died at the age of only 35 years in 1457. Ercole I ordered the Trionfi deck probably later than 1460, the year he returned to Ferrara, but probably before 1470, the year he became Duke. It is plausible that the Estensi deck has been created by one of the artists from the workshop of Pesollino, and considering the resemblances maybe even by an artist who has worked himself on the 1450 painting of the seven Virtues.

The trump cards that the Estensi court commissioned, do not have heraldic devices, nor on the Charles VI deck, nor on the deck he commissioned for his marriage, called the Este deck. The heraldic symbolism is limited to a place on the shields represented on the court cards of the Este deck. But even on the shield of the Page of Swords, the only surviving (existing?) court card in the Charles VI deck, there are no heraldic signs at all. Every handcrafted deck is full of heraldry, this is the only deck without the slightest heraldic element. There are people who suspect the Este court, that they commanded only the Trumps, to have a visible base of discussion for promoting his vision on the 22 Trump card structure. The Page of Swords was produced as maybe only a style example, for the case if anyone ever wanted to reproduce such a deck. The heraldic blazon was not shown, if anyone reproduced the deck, he could put its own blazon on the shields. Possibly, on one occasion or another, he offered the Charles VI cards to someone of the French court, the reason why the surviving cards are actually in France.