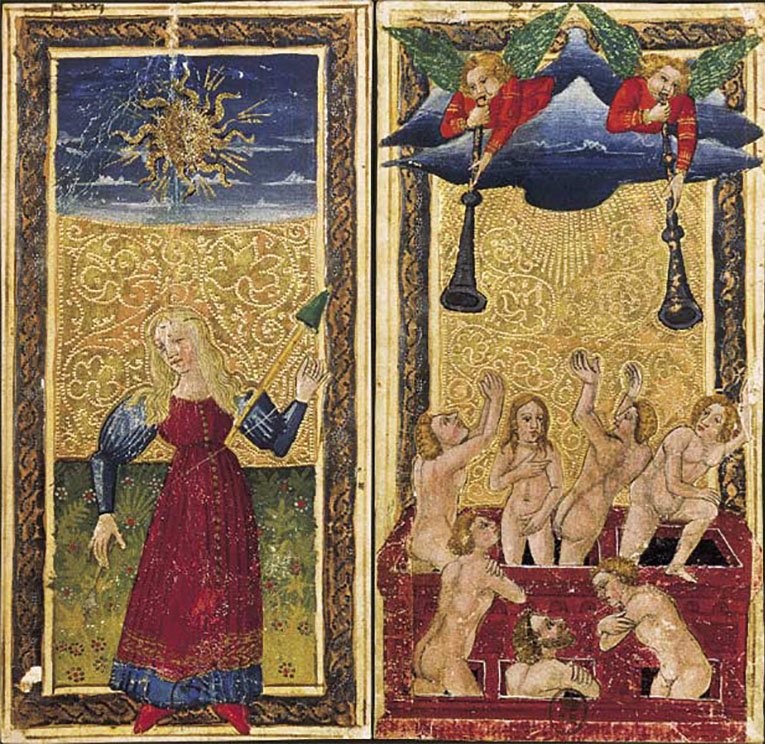 The next card in the Ascent to Light is the Sun. On the Charles VI deck we see a young lady with behind her a wavy radiant Sun. She is spinning a thread. The waves represent the heat and the straight lines of the light that the Sun is emitting. The Sun gives us heat and light, to be short the Sun enables life. Without sun, no life.

On the second deck, commissioned by the Este court, made on the occasion of the marriage of the Duke of Ferrara, Ercole I, with Neapolitan princess, Eleonora of Aragon, the Sun is the central symbol on the card. On this card (here at our right) we see the Greek Philosopher Diogenes in discussion with the still young Alexander the Great. Diogenes was someone who had abandoned everything unnecessary in life. When the temperature was good, he would wear nothing at all, when it was cold, he covered himself with a simple blanked. He lived in a ton. But he had a great name as a philosopher. He is famous, among other things, that once, in clear daylight, he was walking around in the city of Athens with a burning lantern. People ask him,

“what are you doing?”

“I'm searching for an honest man”.

When Alexander the Great, still not much older than a boy, visits Athens, he hears about Diogenes. Curious about the weird Philosopher, he goes to visit him. Looking at the apparently poor man who has no belongings, he asks him,

“Is there anything I can do for you”?

“Yes, please step aside, you are blocking the sun.”

Alexander, who came with many soldiers, continued his questions

“Aren't you afraid for me.”

“Do you represent the Good or the Bad?”

“The Good, of course”

“Why should I fear someone who is Good?”

As a conclusion, the Sun is the real subject of the card, and the scene is just there to accentuate the importance of the Sun. 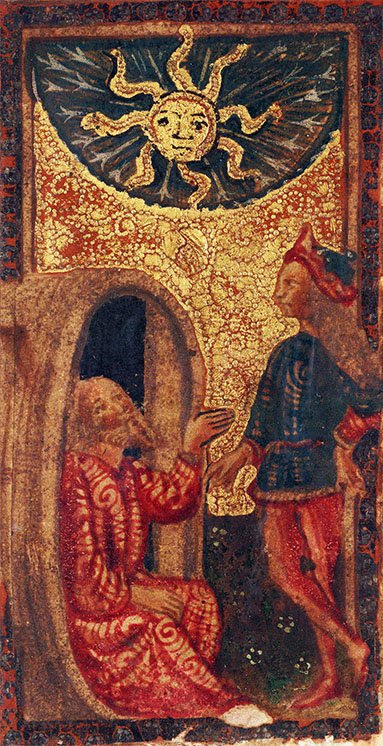 On the second card of this pair, we see on the Charles VI card two Angles calling the Dead to rise for Judgement. The light represented by this card is the glory and splendor of God. The card is a variation of the card we met when considering the Visconti decks. But, there is a great difference, on this deck there is no representation of God the Father nor of his son Jesus. Only the Angles are there. The card represents here only the resurrection of the Dead for Judgement. For the Este deck, we don't know how this card looked like, it did not survive time.

The final judgement announced by this card is described in Revelation 20: 12-13

12. And I saw the dead, small and great, stand before God ; and the

books were opened : and another book was opened, which is the

book of life : and the dead were judged out of those things which

were written in the books, according to their works.

13. And the sea gave up the dead which were in it ; and death and hell

delivered up the dead which were in them : and they were judged

every man according to their works.

PAIR 3 - THE ASCENT OF THE HUMAN SOUL TO GOD