The last group could be some miniaturization of Dante'e Divina Commedia, the Journey of the Human Soul through the Afterlife. In six cards, the Human Soul would travel from the deepest darkness of Hell to the glorious splendor of God. For this reason, I call this group "The Ascent to Light". The highest of these six cards would be the already existing card illustrating the last Judgement. The only change regarding the place of the Virtues was that Justice switched places with Prudence. There were two reasons to switch these two Virtues. The first reason was that in the Renaissance, Wisdom was estimated to be higher than Justice. If someone was wise, he was automatically just. For this reason, Prudence and Wisdom were two words behind the same idea. The second reason was that Justice was associated with the element of Swords, and Prudence with the element of Earth. The element of Earth is often associated with our World, also called Earth. In switching the two Virtues, a representation of the Universe, and thus the sum of our whole existence, would become the highest of the 22 Trumps. This scheme is visualized in the next figure. 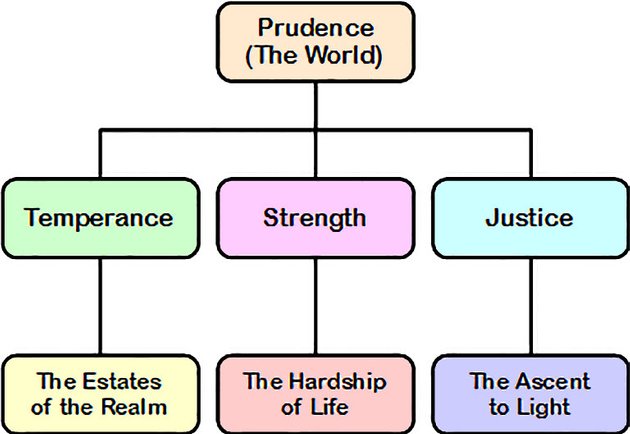 This structure gives us 3 groups of 7 cards, with on top of the structure the World. This emphasizes still more than in the 14 trumps structure the importance of the numbers three and seven. We come back to the last card on the page that is dealing with the Virtue Prudence and the World. In the following pages we will deal with the three pairs forming the Ascent to Light, and for a second time with the Virtue of Justice.

GROUP 3 -THE ASCENT TO LIGHT