THE 16TH CENTURY - A TRANSITION PERIOD

By the end of the 15th Century, Italian nobility lost its interest in Tarot. The Duchy of Milan is conquered in 1499 by the French King Louis XII, great-grandson of Gian Galeazzo Visconti, who was the first Duke of Milan and father of Filippo Maria Visconti. He will stay Duke of Milan until 1512. Most probably some soldiers of the French troops took printed Tarot decks with them back to France.

The period between the end of the  hand-painted decks and the appearance of the Marseille type Tarot decks is a transition period.  For me this period starts in Italy with the Sola Busca Tarot and it ends in France with the Tarot of Paris.

In the introduction, we have met 3 cards of the Sola Busca deck, that inspired the RWS deck. In fact, in 1907 the Sola Busca family did send black and white photographs of the deck in 1907 to the British Museum. Edgar Waite was a regular visitor, so most probably, he was able to consult them. Two years later, he published his own deck.

The Sola Busca deck is nowadays attributed to the Italian painter Nicola di maestro Antonio. Although the structure is typical for the Tarot, with 78 cards, 22 trumps, 4 suits and 40 pip cards, the images are radically different from every other Tarot related deck, existing in that period of time. All cards were illustrated, and the trump cards had little to do with the standard trumps.  Some of them can be recognized,  but nothing more. On all cards, there is a male character, there is no single woman on the trumps.  They have numbers and names, indeed a very modern deck. Here below three random trump examples from the deck previously owned by the Sola Busca family and actually conserved in the Pinacoteca di Brera. The cards were probably printed around 1491 and have been hand colored around 1500. 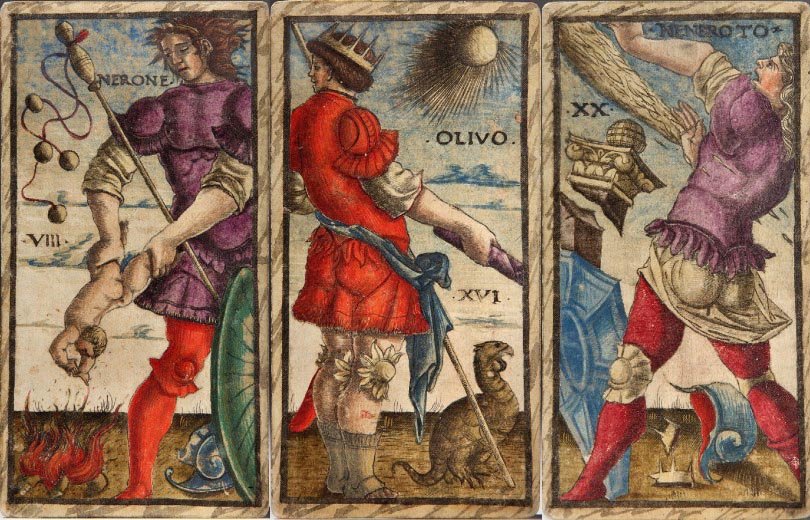 From left to right we see the numbers VIII (NERONE), XVI (OLIVO) and XX (NENEROTO). The card XVI seems related to the Sun and card XX gives to me the same impression as the Tower (Foudre). Card VIII, I could eventually relate it to the Devil. The pip cards are weird, sometimes even grotesque as the next examples will show you.. 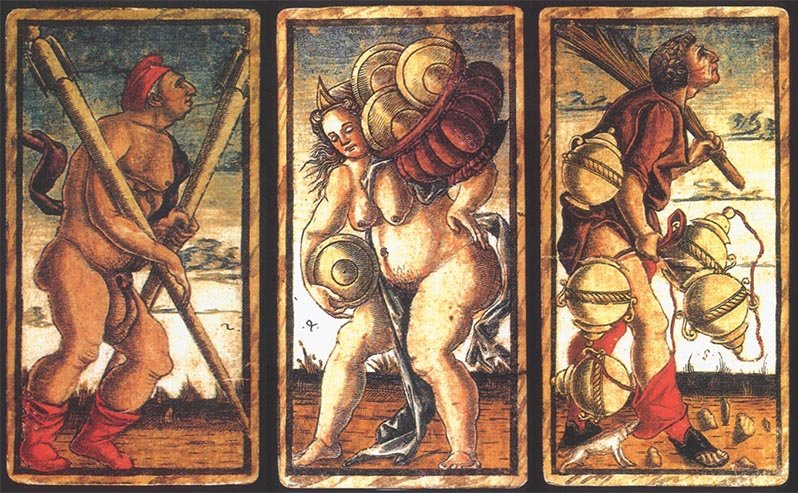 From left to right the 2 of Batons, the 4 of Coins and the 5 of Cups. This last card reminds me strangely the Fool in the Marseille Tarot, was that card based on this image? I'm sure that for the Northern Italian people at the end of the 15th Century these images had a lot of sense. Maybe the faces represent local politicians, who knows? For me, they are too complicated, too far away, I do not understand them, to be short, they don't speak to me. And this is exactly what I have against pictures on pip cards. They speak to the people for a certain number of years. Afterwards, there voices fade away, and we do not hear them anymore.

We have a very limited number of cards that come from the following years, most of them are remainders of uncut sheets.  These sheets had some minor (or major) printing mistakes, reason why they were not used for producing cards. Bookbinders in that time used sheets of paper to reinforce the book covers. From time to time, they used these uncut sheets of Tarot cards to fill up the book covers. Sometimes, when old books are restored, we find these sheets. In this way, some old cards were preserved, not as cards, but as uncut sheets. Let me show you some examples: 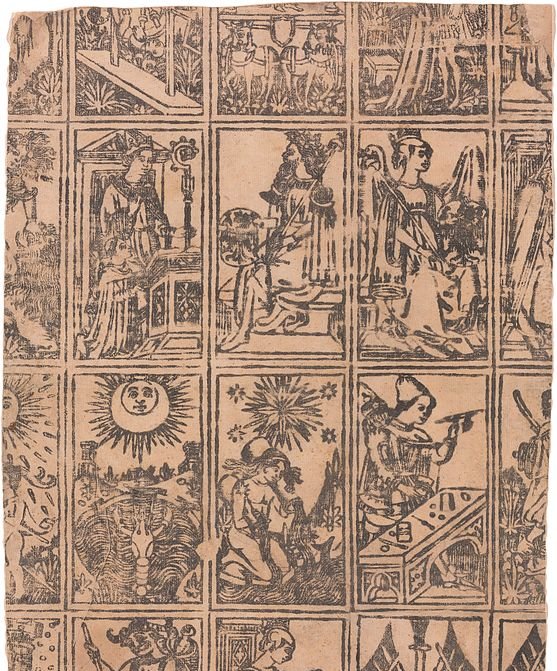 The sheet here above is conserved in the Beinecke library of the Yale University. Clicking on the image will open a high-resolution copy. According to the library, the sheet dates from around 1500. The origin is Italian, probably Milanese. The sheet is fascinating. Both the Devil and the Tower are present (though only fragments) on the sheet. Some images have a lot in common with the Marseille Tarot, suggesting that this style might have its main sources of inspiration in Italy and not in France. From this deck, only one sheet and no cards survived time. 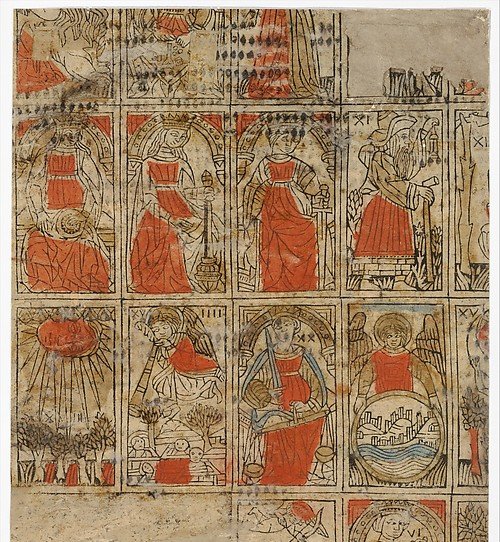 The example above is another Italian sheet dated to about 1500. It is conserved in the Metropolitan Museum of Arts. Again, clicking on the image above will open a high-resolution copy of the sheet. Several sheets with cards  of decks dated to the same period are conserved in the Museum of Fine Arts in Budapest. Searching for Tarot or Tarocchi, will give you access to these sheets, and zooming permits to get very high-resolution images. As example, I show you hereunder the trump number XIII in full resolution. 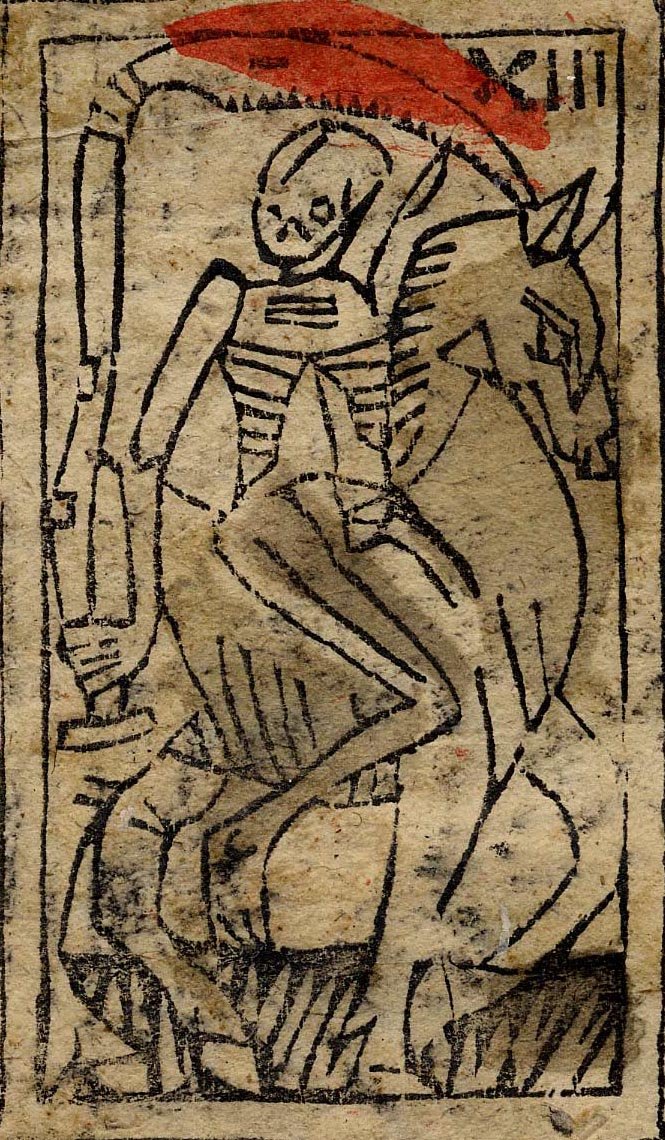 The cards are numbered, and the order is from Ferrara, with Justice numbered XX, between the Angel (XVIIII) and the World (XXI). The Trump cards are all from the same deck, the suit cards (some colored, some not) are from five different decks. 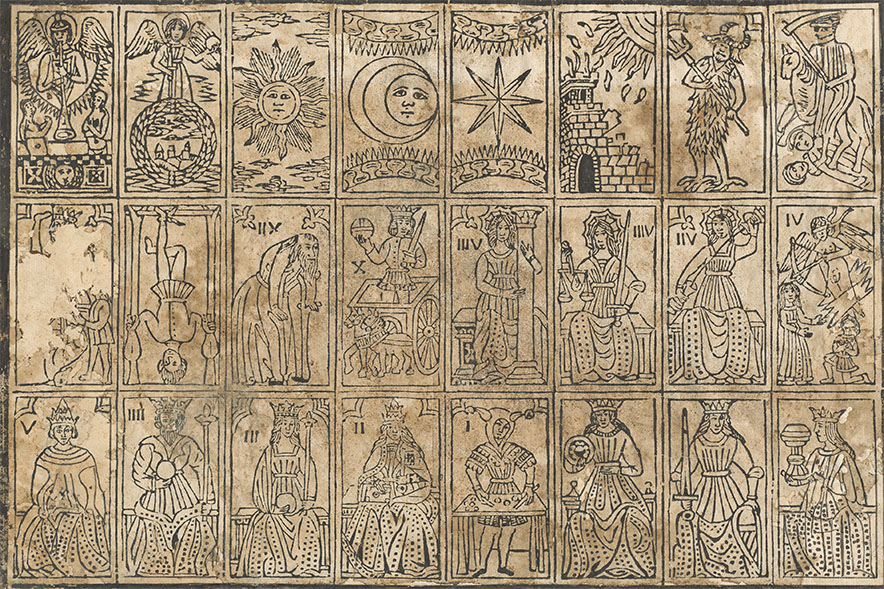 Three sheets are conserved in the National Library of Arts in Washington. They represent 72 cards, with respect to a regular Tarot deck, 6 cards are missing, the Fool, the four Tens and the Queen of swords. The problem is that the two sheets with only suit cards are clearly from a different deck than the above illustrated sheet with the Trump cards. The order of the trumps is close to the Bolognese order, with the three virtues placed together. Death is the fourteenth card, but cards after the Old Man (Father Time, the Hermit, the Hunchback) are not numbered. From the numbering we see, we can conclude that the sheet has been printed in mirror, reason to discard it.

The two sheets with the suit cards (not shown here) may represent a separate complete game of 48 cards. Every suit has nine numbers (the Ten is missing), the Page, the Knight and the King. The Pages are girls for the suits of Coins and Cups, and boys for the suits of Swords and Batons. All four knights are represented by Centaurs, half horse and half human. The one of Coins is identical to the one of Coins of the Bolognese Tarocchino deck.

From the sheet with the trump cards, there is a second copy conserved in the Deutsches Spielkartenmuseum of Leinfelden in Germany, correctly printed this time. However, as you can see here below, this sheet is in an extremely bad condition. 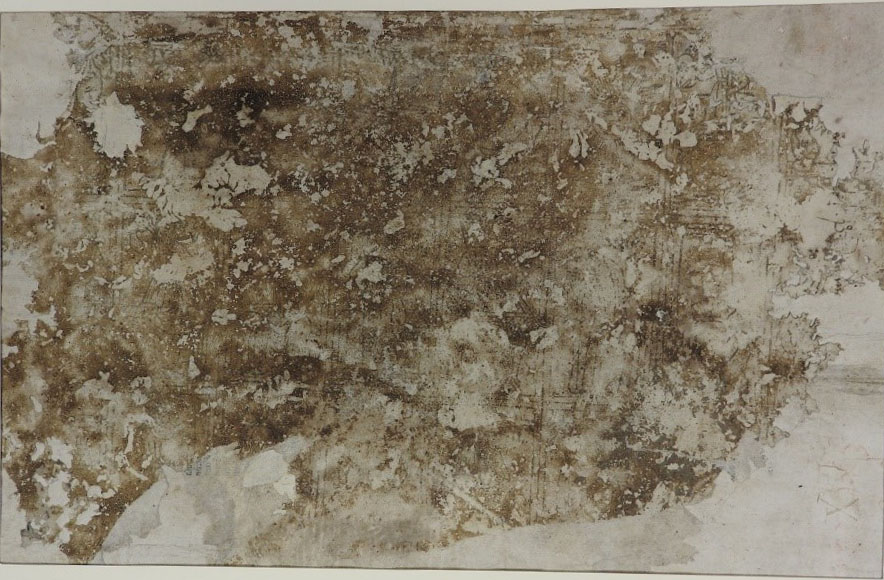 It is very difficult to distinguish anything on this image. Only careful observation of the original sheet can reveal some useful information. 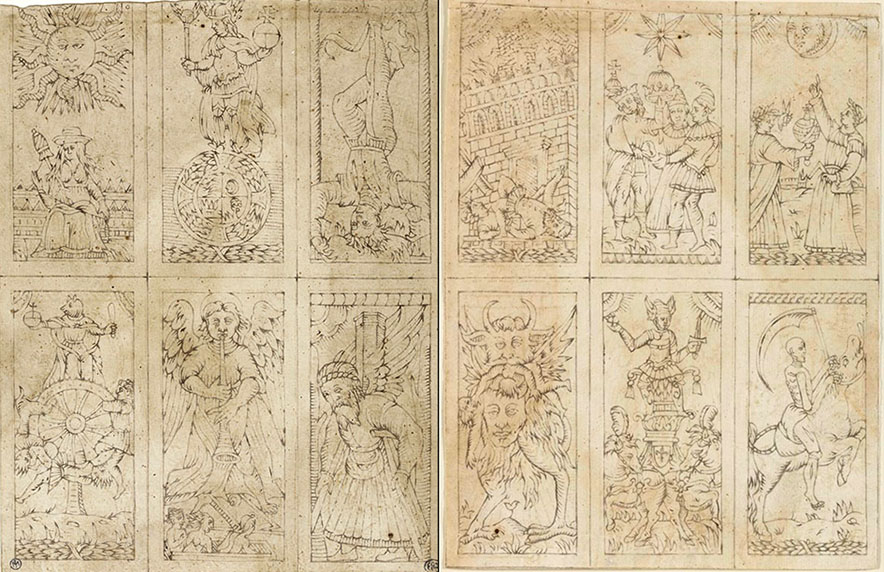 The last sheets I want to show are the so-called Rothschild sheets. In fact, there are two sheets of 6 cards, both conserved in Paris but on different locations. The images  are typical for the Bologna type style Tarocchino decks. Here below I show you the same cards from a very similar Bolognese Tarocchino deck, dated to around 1600 and conserved in Paris in the French National Library. The Devil became less gruesome and Death is mirrored, all other cards are identical. High-resolution copies of these cards can be found on the address http://gallica.bnf.fr/ark:/12148/btv1b105109607. 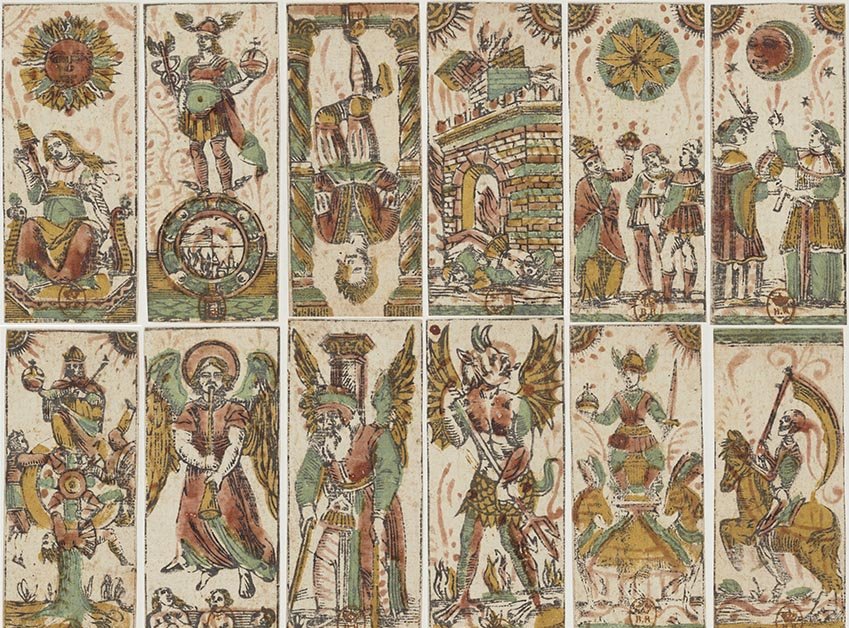 Around 1900, during restoration works in the Milanese Sforza castle, 51 cards and card fragments have been found on the bottom of a well in the castle. The construction of the castle has started around 1450 on the same spot as the destroyed Visconti castle. The card fragments have been dated from the 16th up to the 18th Century. There is a detailed description of the cards in the Encyclopedia of Tarot of Kaplan, and the image here at right comes from this book. The form of the design on the card is the same (but mirrored) as the Tarot of Marseille type cards. On the card, we see the date 1499. The card is attributed to Paoline da Castelletto (on the card we can see PAVLINVS     CASTEL    O), a card maker active at least between 1494 and 1513 in Milan. One other card fragment, a King of Cups, is dated to the 16th Century.

There is no evidence that the Two of Coins is a Tarot card. In fact, the card is smaller than the typical size of Tarot cards, so it might as well belong to a normal deck. While in Italy, the suit cards of the Tarot are identical in design to normal playing cards, it is only possible to differentiate them when trump cards are actually present. 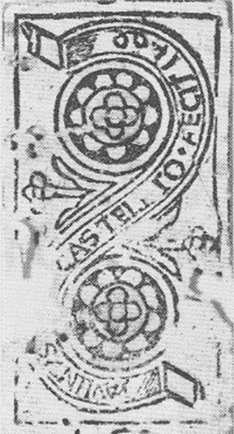 In France there are many references to cards and Tarot dating to the 16th Century, but very few cards survived. The only deck of which we have some cards left is the deck of Catelin Geoffroy (1557). 12 Trump and 26 suit cards survived, of which 5 court and 21 pip cards. The pip cards are a mirrored copy of the German Virgil Solis deck (1544). Images of both decks can be found here. Actually, they are conserved in the Museum für Angewandte Kunst in Frankfurt am Main (Germany). The suit symbols are animals (lions, monkeys, parrots and pawns) and every suit has only three court cards. The trump cards are numbered, not named, and they follow the order of the Marseille Tarot. But, the images are much more dynamic. We have no earlier cards who look like this deck. Examples of the Trump cards, the cards numbered VII, XII and XVI. The image on card 16 has nothing to do with the traditional images of a Tower, a Traitor or Lightning that we can find in other decks, with the Devil clearly present. The image of the Hanged Man in profile is later used on a Swiss version of the Marseille Tarot. 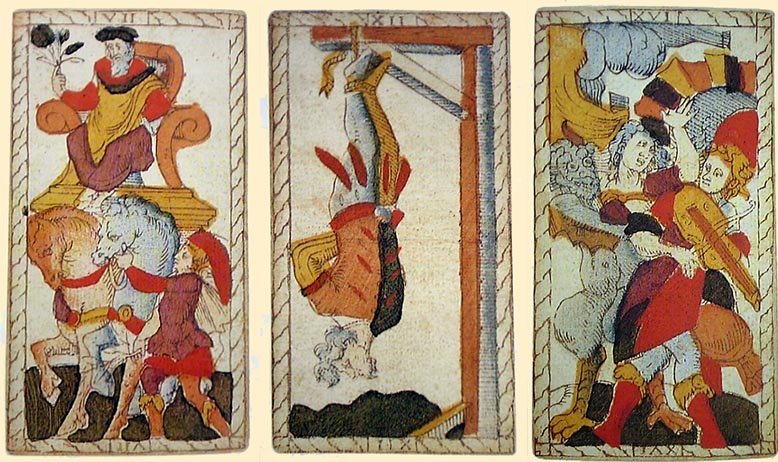 The last deck of the transition period that I want to present you is the anonymous Tarot of Paris. The deck has probably been created in the early 17th Century. It is the oldest complete French deck we dispose of. A copy is conserved in Paris in the French National Library and high-resolution images can be found on the address http://gallica.bnf.fr/ark:/12148/btv1b105109624. The cards are numbered according to the Marseille order and for the first time the Aces, the Trumps and the court cards are named. Examples corresponding to the same cards as the Catelin Geoffroy deck are shown here below. 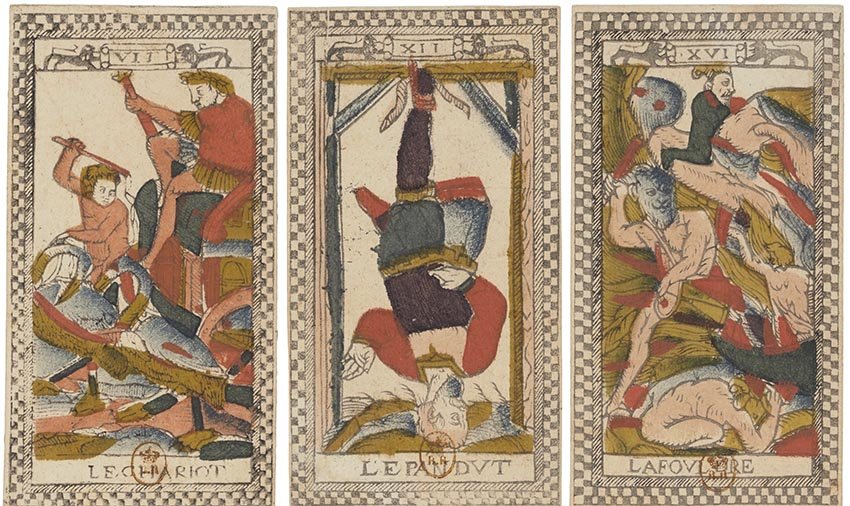 The cards are in a similar dynamic style as the Catelin Geoffroy deck, but the images are very different. Like in our time, the artists took a great liberty in designing the cards. The same we can say for the pip cards. The Aces depict animals carrying a Flag (like in some German card games), the Coins illustrate heraldic elements, the Swords are Italian curved swords, arranged in an entirely different way compared with the Marseille Tarot, and also the Batons are arranged in an original way. An example here below:

The Court cards are in the same dynamic style as the Trump cards. Because an image says more than a thousand words, here below some examples:

The rare examples we have from the transition period between the Italian Trionfi decks and the French Marseille Tarot show an enormous diversity in the Tarot decks. Visually, many of them are very different from the standard Italian suit cards. As in the 15th Century, the card makers still had a great liberty in the design of their decks. In France, the deck structure standardized to 78 cards in a very specific order, and although this order predates the Marseille Tarot, we refer to it as the Marseille order. In Italy, the regional differences in structure did not disappear. This will be explained on other pages about the Tarocchino and Minchiate decks.