COUSINS OF THE TAROT

As we have seen, the Tarot is the result of  gradual evolution. It had his ancestors, like the Michellino deck and the Visconti di Modrone. And even the Visconti Sforza deck was, in fact, an ancestor that has adapted itself to its children. But the Tarot not only has  ancestors, it also has cousins. Cousins differ from the Tarot in structure, they have a deck that does not necessarily consist of 78 cards. They can be trumps only,  like the Mantegna deck with 50 trumps, have the same number of pip cards but a higher number of trumps, like the Minchiate deck, or they are using the same number of trumps but less pip cards, like the Tarocchino deck. All these cousins have three things in common, their origins go back to the fifteenth Century, they are Italian, and they are really fascinating.  There is a debate about their exact origins, but probably  the  Mantegna deck has its origins in Ferrara or Venice, the Minchiate deck in Florence and the Tarocchino deck in Bologna. Here below a typical example of these three decks, with four cards of each deck that you will not find in any other so-called Tarot deck. We have respectively four of the Muses of the Mantegna deck, the four elements of the Minchiate deck and the four Moors of the Tarocchino. In the next pages, we will explore these three variations on the Tarot a little further. 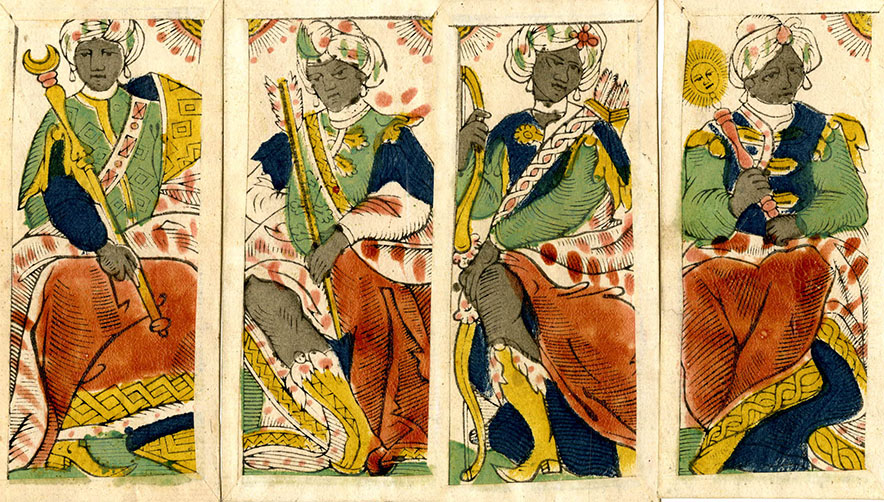