Cards were introduced in Western Europe around 1375 via Venice and Spain. Very soon the cards spread all over Europe and started to change with respect to the Na'ibs or Saracen cards. How these cards looked alike we don't know, the oldest cards we have date from the 15th Century. The Europeans liked the principle and adapted the decks to the games they invented in a number of ways:

The figure here under is a typical European card deck illustrating these variations. It is a German card deck created in Cologne around 1500 by an unknown card maker who signed his work with "P.W.". There are five suits and the cards are round. The suit symbols are hares, parrots, carnations, columbines and roses. A copy of the full deck can be found here.

These were not the only things that changed. Some other typical features of early European card decks :

Most games conserved the 10 numerals, but some decks dropped one or more of the pip cards, for example the one, from two to five, from two to six, etc.

For religious reasons, the Mamlûk cards could not represent living creatures and only give figurative decorations. Catholic Europe did not have this limit. The court cards became portraits of people, sometimes portraits of famous people who lived or recently died. The numbered cards were often used to show scenes of nature or daily life.

Some other decks introduced extra cards, just a few, or sometimes many extra cards appeared, for example Roman Gods or allegorical figures.

The next example is a deck from around 1455/1450, the Ambras court game. It is again a German deck where the suit symbols are the blazons of a country (Germany, France, Bohemia and Hungary). The value of the card is indicated with a roman number. On the card, we see scenes of the daily life in a typical European court. Here we show card number 5 of every suit. We see a waiter, a cook, a falconer and an archer.  High-resolution images of the cards can be found here.

There was a real diversity in the decks. A fascinating deck is the Stuttgart hunting deck, dated to around 1430. It is, like the two previous examples, a German deck. The card images have several interesting features :

The figure here below illustrates these features, the full deck can be found in high resolution here. 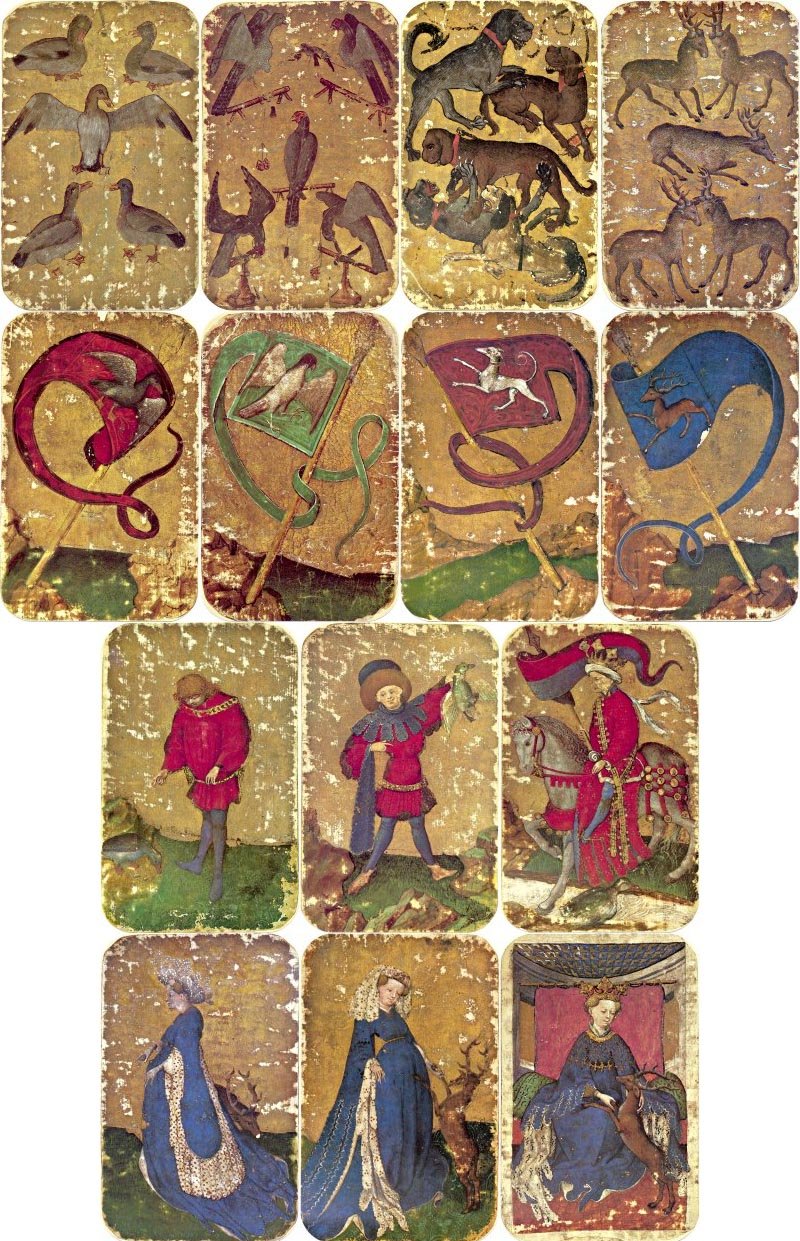 As a last example of the diversity of the early European decks I want to show you a Flemish deck, like the previous deck it is a so-called hunting deck. This deck is not using animals but hunting attributes like a hunting horn and dog collar. The cards are not rectangular but oval and  date from about 1470-80. They are conserved in the Metropolitan Museum of Arts. It is probably the oldest set that is entirely complete. On the website of the Metropolitan Museum, you can find high-resolution images of each card. Images with a slightly lower resolution can be found on the site http://cards.old.no/1475-flemish/.

The deck is what we call today standard, 10 numbered cards from one to ten and three court cards. The court cards exhibits knaves, queens and kings. An example is shown in the figure here below with two knaves, a queen and a king.

Apparently, a  rather typical deck for its time was the 1420/1425 Milanese Michellino deck. This deck consisted of four suits with Doves, Turtle-doves, Phoenixes and Eagles as suit symbols and a King as the highest court card. It had six court cards, the three male court cards that we find in other early decks were doubled by their female counterparts. But there were some extra cards, all portraying Roman Gods (for further details see the pages about Tarot development). As you will see later this  deck is a direct ancestor of the Tarot cards.

People like to play cards with a structure and symbols they recognize. The number of 4 suits became the standard and a full deck consisted of 48, 52 or 56 cards. Over time, three families of suit symbols became more or less standard :

The numbered cards show only the suit symbols or, like in the Sola Busca and many German decks,  small drawings, often satirical.

Most decks served only for recreational purposes, or for gambling. But other card makers went further. They started to use the images on the cards to transmit a message. The simplest example is the Italian style suit symbols. Some people think that these suit symbols, also used in the Tarot decks,  represented human society :

On later pages, we will explore more in detail the associations that can be made with the suit symbols. In some decks, the message  became more important than the game. And that is how the Tarot was born. And that is also what these pages are about,  the history of Tarot and the message behind the cards.