THE EARLY HISTORY OF CARD PLAYING OUTSIDE EUROPE

Cards are made from paper and paper is a material that does cot conserve very easily. Paper hates humidity and it deteriorates very easily. So it is no surprise that  none of the oldest card decks did survive. Paper is invented in China, and for this reason most experts think that the card game is also invented in this country. There are written texts from the Middle Ages describing some sort of card playing in Persia and China as far back as the 9th Century. Where did it all begin? I don’t know, and in any case this is outside the scope of this web site dealing with the Tarot game.

What is clear is that before the card game travelled to Europe, it became popular in India and in Egypt. And here it becomes interesting for us, because it is in Egypt that we find the nearest ancestors of the European card games. But let us me clear immediately. These Egyptian cards have nothing to do with the trumps in the Tarot game.

The Mamlûk Sultanate (Arabic: سلطنة المماليك‎ Sulṭanat al-Mamālīk) ruled over Egypt from 1250 to 1517. And it is from this period that we know a card game that is very close in structure and symbolism to the oldest European cards. We call them the Mamlûk cards, and the most complete game is conserved in the Topkapi Museum in Istanbul. These cards date from the late 15th Century , but older single cards or fragments are known dating back to the 13th Century. High resolution images of these cards can be found here. 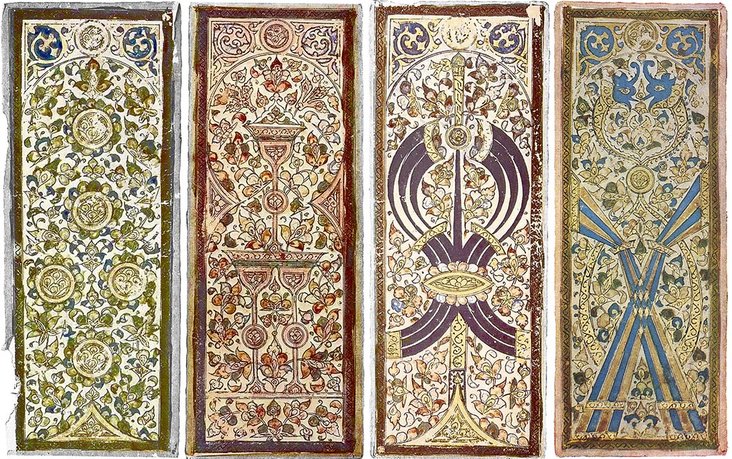 From left to right the 5 of Coins (Darahim), the 3 of Cups (Tunan) the T of Swords (Suyuf) and the 10 of Polosticks (Jawkan). On the top row the Mamlûk cards and on the bottom row the Tarot cards of Jean Dodal. The resemblance of the suit symbols is striking. The Mamlûk decks had three court cards in each suit. For religious reasons they were all male: the King (Malik), the Viceroy (Na’ib) and the Second Viceroy (Na’ib thanin). In the following figure as an example the court cards from the suit of Cups, ordered from the lowest to the highest ! 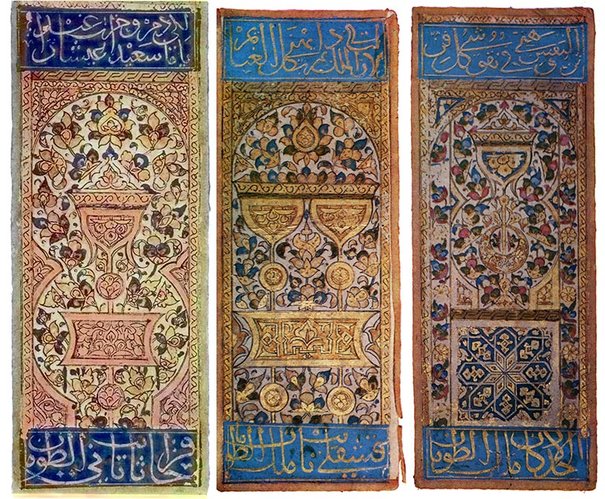 Al the Malik (King, right most picture) cards share the same octal pattern on the base. On the bottom of the court cards a description of the value of the card, and on the top of the cards a saying of which I ignore the significance. Mamlûk cards arrived in Europe around 1375. In Italy they were brought by Venetian merchants who had lots of contact with the Mamlûk civilization.  The cards were called Saracen cards or also Na'ibs (Naips).